A Family’s Fill of X’s and O’s 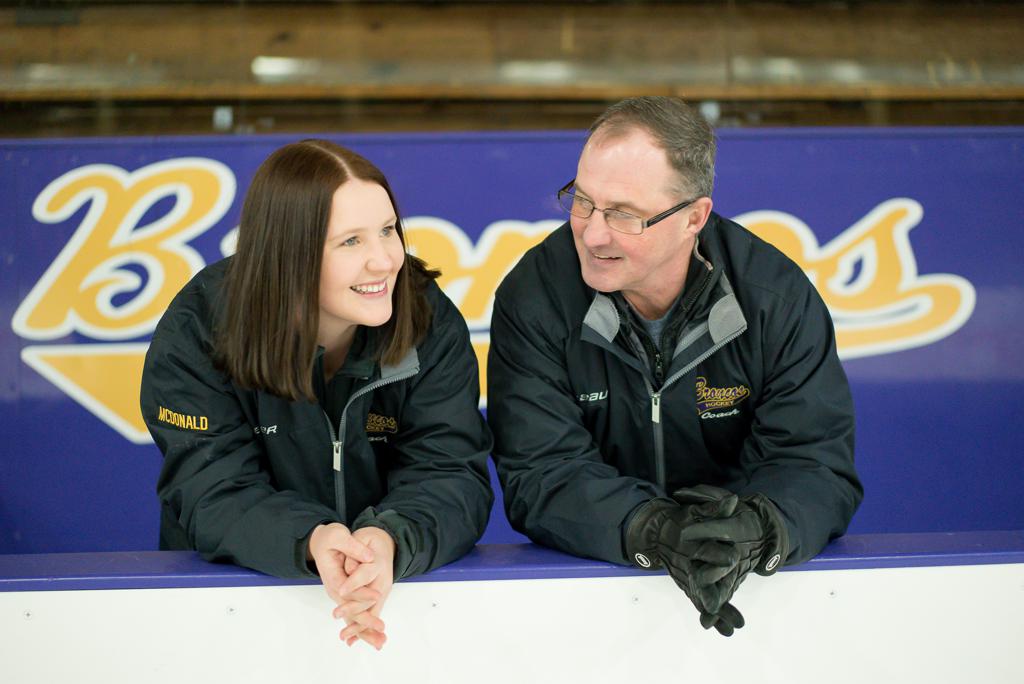 For as long as she can remember, a hockey rink was a like a second home to Michele McDonald.

Whether she was on the ice for practices or games, or cheering on her hometown International Falls Broncos, if she wasn’t actually at her house – conveniently located between the city’s two arenas – she was usually at a rink. It just comes with the territory when you’re a player, and when you’re the coach’s daughter.

“I was just always at the rink,” recalled Michele, 24. “It was hockey every day, but I loved it.”

But Michele didn’t just pick up the hockey bug from the rink. She picked up the coaching bug, too. Following in her dad, George’s, footsteps, father and daughter now make up the Falls High School varsity coaching tandem; Michele in her first year at the helm of the girl’s team and George in his fourth year as head coach of the boy’s squad.

“I think it’s extremely rare even for one person to (be able to coach at their alma mater), let alone both of us,” said George, who played for the Broncos from 1978-82; Michele from 2007-2012. “We grew up with purple in our veins as we say up here and I think it’s very rewarding for both of us.”

George’s coaching career began once his playing career ended. Shortly after graduating college he took his first teaching job in Bemidji in 1988 with an assistant coaching job at Bemidji High School included. George taught and coached for three years in Paul Bunyan’s neighborhood before the opportunity to move back home to International Falls came about.

Coaching, of course, was a part of the allure and in 1993 he was on the Bronco bench as an assistant.

But with Michele on the ice as a young player, George noticed he missed celebrating her hockey experience.

“I was missing her games and I wanted to be there for that,” he said. “So I took a few years off from coaching to watch her play.”

Michele made sure it was worth watching. In four years she scored 31 goals and tacked on 40 assists for the Broncos.

It was an extra homage to her dad, who, naturally, was Michele’s favorite coach growing up.

“My dad taught me how to play,” said Michele, who played five years with boys’ teams under George’s tutelage from Mini Mites through Squirts. “I would say with hockey and with life, he’s probably my biggest role model.”

“He’s why I always wanted to coach,” she continued. “You grow up and you watch your dad coach and it’s always in the back of your head that you want to be like them. My parents are good role models and they enjoy it, and you give it a shot and end up enjoying it just as much

No strategy talks at the dinner table

“When she was younger, she saw me come home from a tough loss and how I didn’t really want to talk hockey too much after that. Now she really understands that,” said George.

They do find time to talk shop when they’re at work however. Both Michele and George teach special education classes at Falls High School. When they can carve the time out to grab lunch together, they do. It provides each a time to catch up with one another, and provides Michele the perfect opportunity to pick her dad’s veteran coaching brain as well.

“We’ve always talked hockey but it’s fun now to sit down and think about plays or if I’m stuck on something I can ask him for help or say, ‘Hey we are doing this well, can we extend off of it?’ That kind of stuff,” Michele explained. 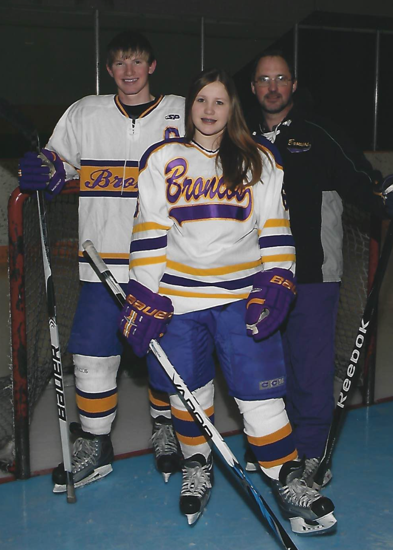 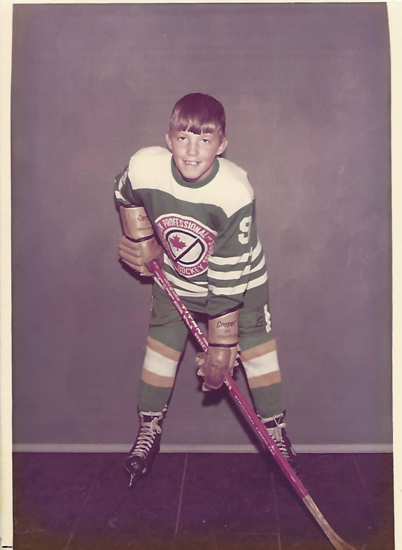 “A lot of people look at coaching and it looks like so much fun, and it is, but my first piece of advice to her was that there is a lot of things that people don’t see that you have to do behind the scenes,” he said. “With high school sports there are a lot of responsibilities off the ice. Michele is the same as I am in wanting a team to be good students in school and be responsible outside of school, outside of the rink.

Coaching for the next generation

But as distinctly as the temperatures rise and fall on the state’s uppermost edge, the numbers within the northern hockey program also tend to fluctuate. 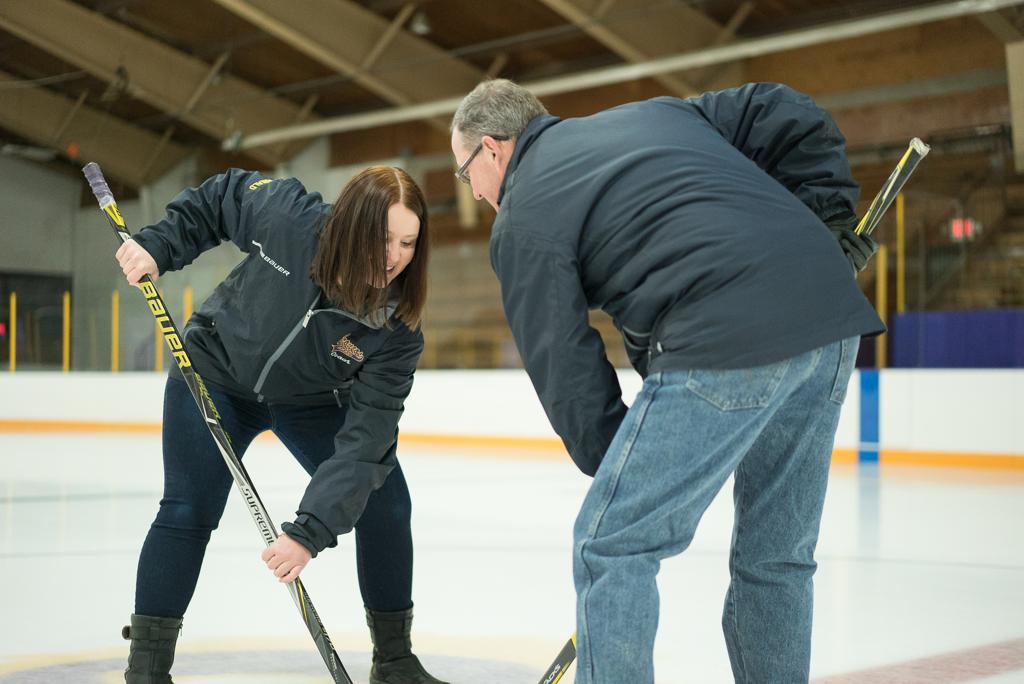 “It can be hard, sure,” said Michele, whose varsity team is made up of 12 junior varsity and 12 varsity-leveled players. “But this year we have a 12U team that we didn’t have last year, so that’s pretty exciting to see. We’re building on that and we know it’s going to be up and down, but I look at like, this is the 25th year of girl’s high school hockey, and I’m 24 so girl’s hockey was just starting to shoot up when I was younger—when there were just a couple girls even playing.

“I have confidence we get those numbers back up and will get them bigger each year.”

George beams with pride at his daughter’s passion and eagerness to coach the next generation. Together the McDonald’s hope to restore Bronco hockey to its early successes, celebrating the successes of one another along the way.

“When she’s coaching, I’m a proud dad up in the stands,” said George. “I see her put everything she has into it, and when she succeeds in a game, or whatever, it’s just really special. A lot of people ask us, do you have a little competition with your records, and with us it’s nothing like that. I’m more than excited when she wins and I know she’s excited for me.”