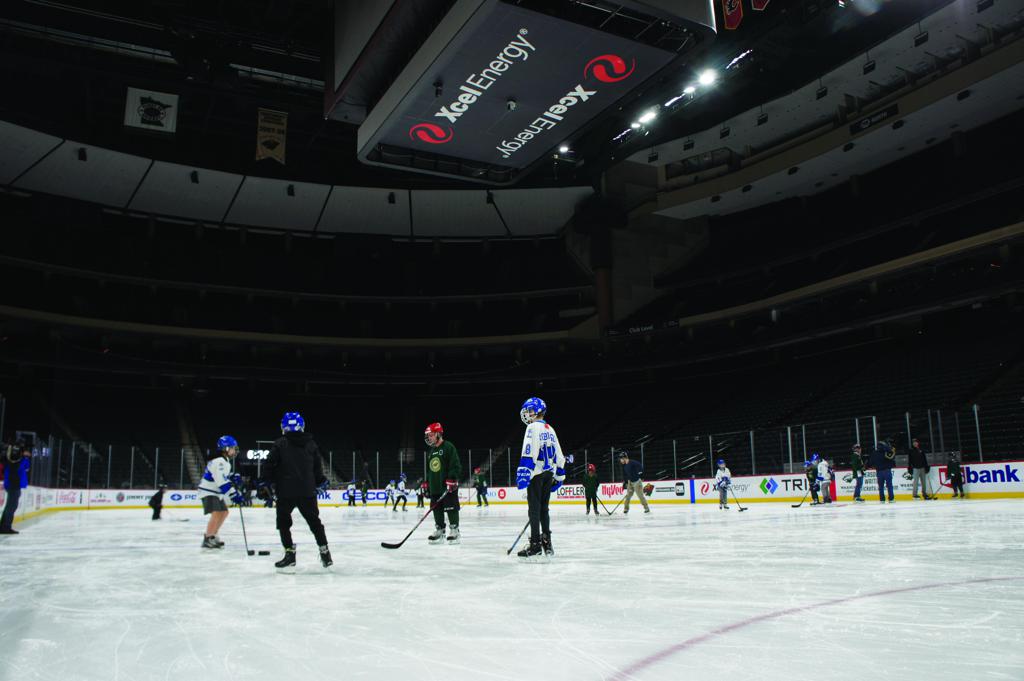 As soon as Mike Hutchens laces his skates and steps out onto the ice, he listens carefully to the noises around him.

Over the sounds of coaches shouting drills and volunteers pounding their sticks onto the ice to help guide fellow players—Hutchens is focused on the clanking of a loud, metal puck gliding toward him.

Though he’s without his sight, the 33-year-old Mankato, Minn., native relies heavily on the echo of his voice and the sounds on the ice to serve as his guide.

Hockey is still new to Hutchens. But as one of 18 registered players in Minnesota’s first-ever blind hockey program, the sport is quickly becoming one of his favorite pastimes.

“This is so cool,” Hutchens said. “I took up skating last year. I decided to try it and I love it.”

The Minnesota Wild Blind Hockey program, presented by UBS Financial Services, was launched as a partnership between Minnesota Hockey and the Minnesota Wild. The first practice was held in October 2018. Like Hutchens, skaters of all ages, skill levels and visual impairments participate in weekly ice sessions, while learning the basics of skating and hockey.

Few adaptations are made to the game, but the biggest difference is the puck. It’s large, the size of a dinner plate and slower than a traditional hockey puck.

“It’s all about sound,” Hutchens said as he shot the puck into the net during practice. “There are ball bearings inside these pucks and they roll around inside the metal.”

Toni Gillen, disabled programs director for USA Hockey in Minnesota, can’t help but smile as she stands inside the loud rink. Players are getting their chance to live a dream, thanks to countless individuals who made the program possible.

“Our volunteers and our coaches are so committed to this,” Gillen said. “I’m blessed. Completely blessed.”

Though still in its infancy, the Minnesota Wild Blind Hockey program is thriving.

Blind hockey is still relatively new to the United States. Its origins can be traced to Canada in the early 1970s, but the sport wasn’t officially introduced into the U.S. until 2014.

During the first-ever Blind Hockey Summit held in Newburgh, N.Y., in October 2014, local players and visiting Canadian players played games and held try-it sessions for anyone who was interested. The response prompted USA Hockey to hold a similar event at the 2015 USA Hockey Disabled Hockey Festival in Buffalo, N.Y., and blind hockey has since become one of the fastest growing segments of Disabled Hockey.

The reaction to the blind hockey program was greater than she could have ever expected.

“Surprisingly, we had amazing responses,” she said. “We’re very used to starting programs in Minnesota for hockey, but this one really took me by surprise as to how amazingly responsive not only the community was, but also the Wild and the players.”

Some of Gillen’s first contacts were with the Minnesota State Services for the Blind in Mankato. They were able to send information out via radio and correspond through their network to assist in finding coaches. The response led Gillen to Lonny Evans.

In addition to coaching with two other coaches and helping to organize players and volunteers at practices, Evans volunteers his time as a program director, which involves connecting with many families and communities.

For Evans, the chance to help pioneer a sport for disabled athletes is close to home.

“Our daughter was adopted from Russia,” Evans said. “Elena came home at three and a half and had never taken a step. Her legs were not fully developed and she had both feet amputated that summer. After she healed up, she took her first steps, and then two years later, she was the only girl on an all-boys Mite hockey team out in Minnetonka. She played with kids who were able-bodied. Then we got involved with USA Hockey, the amputee side. It was amazing … That’s how I first got involved and connected with Toni.”

In his experience helping with Minnesota Wild Blind Hockey, Evans knows there’s still work to be done. But the success of the program so far has been phenomenal.

“We’re being purposeful,” Evans said. “But since it’s so new and you just don’t know who’s going to be there or how many we’re going to get or what the dynamic will be—we have to be really flexible and fluid.” 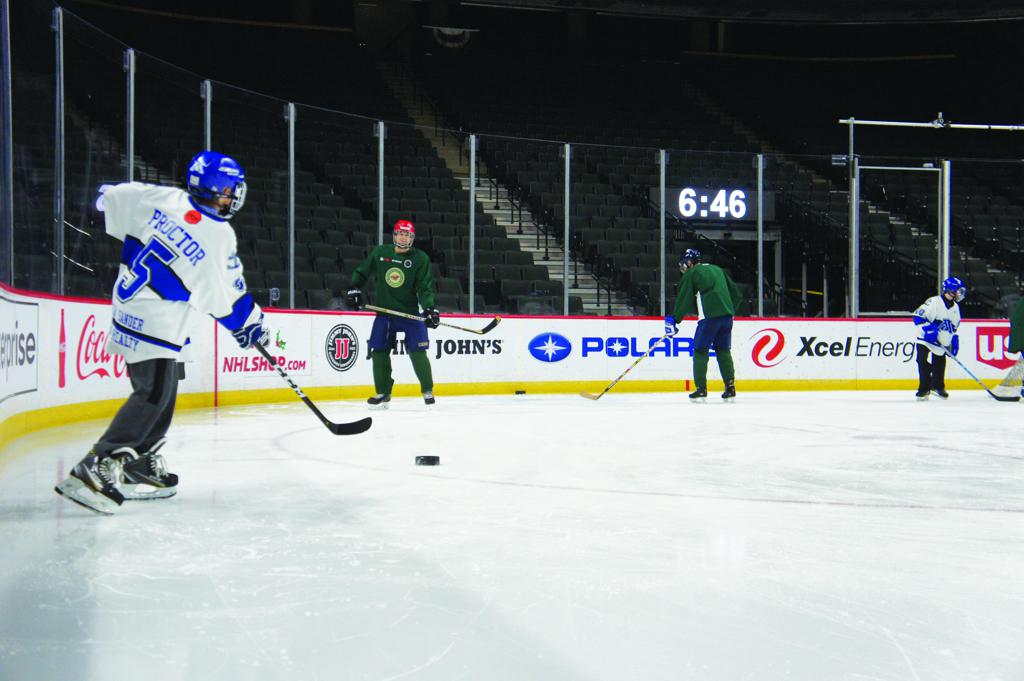 Minnesota Wild Blind Hockey welcomes all players with open arms. From its youngest 9-year-old skater to its oldest who is in his 50s, the program is all-inclusive.

“It’s a wide spectrum,” Gillen said. “Some of them have played hockey before. We have some folks who played hockey as youth in high school and their vision has either been impaired through either a degenerative condition or through injury—so they’re just loving to get back on the ice again—all the way down to individuals who were born visually impaired, or it was just kind of a gradual thing through their youth.”

Whatever their level of experience, players participate in the sport with minimal adaptations to the traditional game.

Nets are 3 feet high instead of 4 feet high, and the puck is much larger and louder. Teams are also required to complete one pass in the attacking zone prior to being able to score. To help indicate when the attacking team is eligible to score, officials use a different whistle.

Players also play in different positions, depending on their visual acuity. The more a player can see, the further up they play. All skaters have some level of visual impairment, but goalies are typically completely blind. If they’re not, they’re blindfolded.

“We’ve got bigger, older skaters—we’ve got smaller, younger skaters and everything in between,” Evans said. “ Because of that, we’re able to utilize a bunch of different volunteers.”

The program typically welcomes a hockey team—from Squirts to Peewees to Bantams —or a group of volunteers to assist the team during practice.

“It’s been amazing,” Gillen said. “They’re just as interested in this program as our players are.”

Whether it’s guiding them across the ice, passing the puck or lending a few words of encouragement, volunteers are available to provide supplementary support to the players.

A Minnetonka Peewee hockey team volunteered its time when the Minnesota Wild Blind Hockey Team practiced at the Xcel Energy Center in mid-December. For two skaters, it was a chance to connect on a new plane.

“The Minnetonka piece is really cool in that one of the kids out there, Brady, his sister is Emily, one of our skaters,” Evans said. “I think it was really a cool validator for her—for a teenage boy to be out there with his sister in a setting that’s cool. Their dad was tearing up, and I made a comment saying, ‘this is so cool.’ And he said, ‘you know, if people knew behind the scenes how they go at each other—to see them out on the ice getting along is so great.’ It was really powerful to him.” 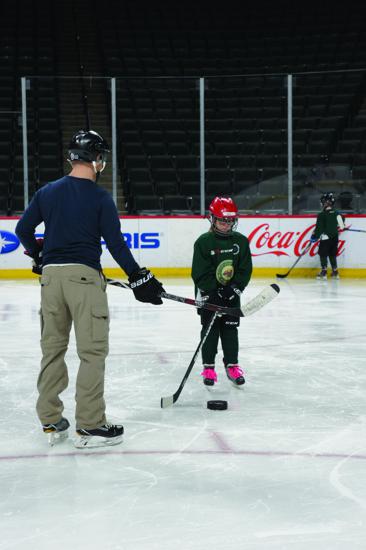 Ever since Gillen approached Minnesota Hockey and the Minnesota Wild about blind hockey, both have show full support.

“They’ve been so amazing,” Gillen said. “Minnesota Hockey, first of all, said, ‘let us know what you need.’ And then when I went to the Wild and said we’d like to make this a branded program, they said, ‘we are on board one thousand percent.’”

“To have that visual, for those of us that are not visually impaired, is also a really cool thing,” Evans said. “People recognize right away that this is the State of Hockey, and we are a part of something really special here.”

For players like Hutchens, who have been hockey fans for years, getting involved in a program like Minnesota Blind Hockey is especially enjoyable.

Hutchens has been a Minnesota Wild hockey fan since 2000, which made the opportunity to practice on the same ice as his favorite players a surreal experience.

“When we were at TRIA he said, ‘Lonny, I love the Wild!’ and I said, ‘Mike, how cool that you’re skating for the Wild,’” Evans said. “It means so much to have that support. I think it tells people they are valued and valuable.”

The support is just another example of Minnesota’s tight-knit hockey community.

“The hockey community in general is just so giving, and they watch out for each other and support each other,” Evans said. “I don’t take this for granted, but none of what I’m seeing or experiencing is necessarily surprising, because that’s how it’s always been in my experiences.” 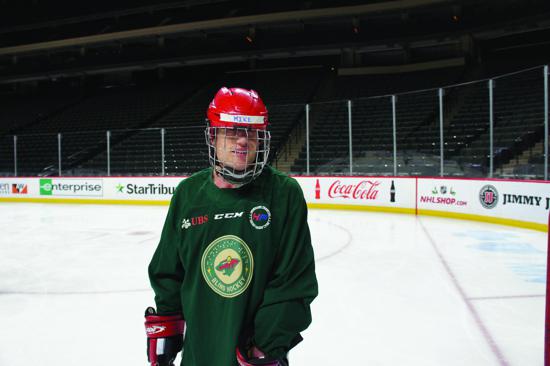 “When we were at TRIA he said, ‘Lonny, I love the Wild!’ and I said, ‘Mike, how cool that you’re skating for the Wild. It means so much to have that support. I think it tells people they are valued and valuable.” - Lonny Evans

Looking toward the future

During the weekend of August 23-25, 2019, the Minnesota Wild, Minnesota Wild Foundation, Minnesota Hockey and USA Hockey will host the 6th Annual USA Hockey Blind Hockey Summit at TRIA Rink in downtown St. Paul. The event will feature a coaching clinic, a try-it session, a community banquet and games for all sizes and skill levels.

The location will also soon be a familiar place for the Minnesota Wild Blind Hockey team.

During the program’s inaugural season, weekly practices were held in various locations throughout the Twin Cities metro area, including rinks in St. Paul, Blaine and Woodbury.

But starting with the 2019-20 season, the team’s home rink will be TRIA Rink.

Gillen also hopes to welcome new faces to the team in the comings years. She’s optimistic the program will garner enough players for both a youth team and an adult team.

If the first season is any indicator if its success, both Gillen and Evans know there’s much potential for the future of the program.

“We’re definitely in our infancy,” Evans said. “All it takes, like anything, is one word to the right person and things open up. People understand and see things differently and in a new way … I hope we’re giving 100 percent right now to the team as it is, as well as thinking 100 percent for the people who have yet to do it.”

Minnesota Wild Blind Hockey has opened new doors for novices, and has made dreams come true for players who used to spend so much of their time on the ice.

“For those who have played hockey in the past, this is another way to regain their life back again,” Gillen said. “For the majority of our players, especially the youth, they never thought they’d ever be able to play the sport. To be able to be on the ice, to feel so supported and be a hockey player… I literally go home tearing up every night after practices. We’re doing something so special here.”