How small players cannot only survive, but thrive in today’s game 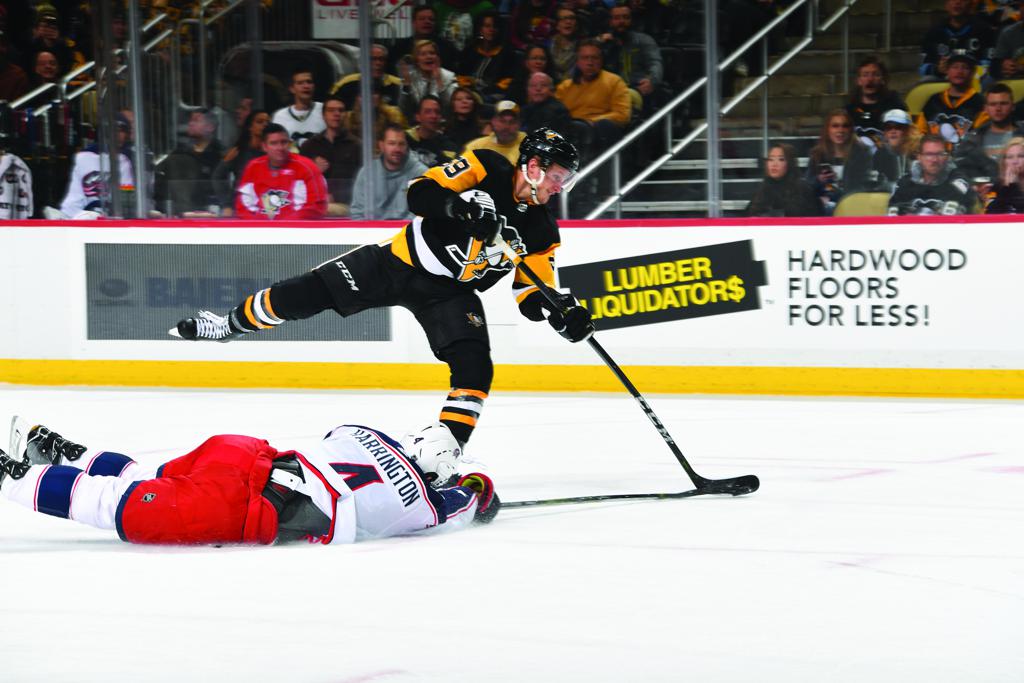 Two years ago, Bruce Boudreau got the job in Minnesota, and then-GM Chuck Fletcher during the interview process raved to the veteran NHL coach about the Wild’s biggest strength, the blue line.

Boudreau knew about Ryan Suter, the Wild’s No. 1 defenseman and league’s chief minute muncher. He knew about the big shot of Matt Dumba and the mobility of Jonas Brodin.

But Fletcher told Boudreau, “Wait ‘til you see how good Jared Spurgeon is.”

Boudreau took the job, and all summer long, everybody he spoke to echoed Fletcher’s sentiments: “Wait til you see how good this kid Spurgeon is.”

Boudreau couldn’t wait to get his eyes on him.

And then he did.

“I looked at him and he looked like he was just getting out of elementary school,” Boudreau said, laughing. “He was only 160 pounds or 155 pounds. And I said, ‘There's no chance that this guy's this good.’ And then, I found out he was.” 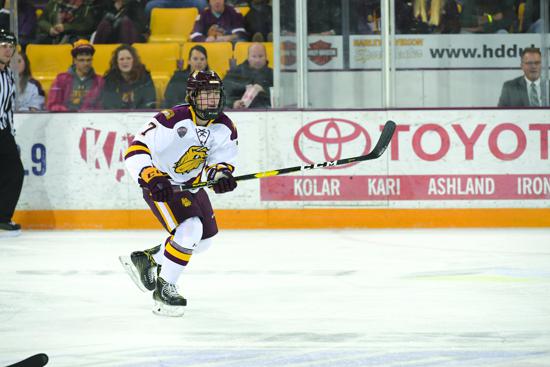 Hibbing, Minn., native Scott Perunovich is 5' 10" and was named 2018 College Hockey Freshman of the Year, UMD 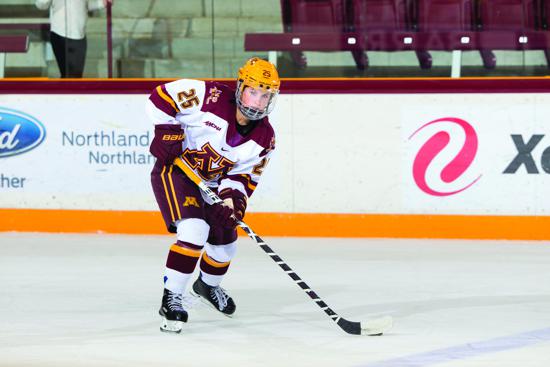 At 5'5", Red Wing, Minn., native Nicole Schammel is the leading scorer for the Golden Gophers.

If you’re a youth hockey player wanting to play at the next level but worried that growth spurt will never come, Spurgeon has one message for you: “Don’t give up. Don’t let anybody tell you, ‘You can’t do it because you’re small.’ You don’t need to be gigantic to play in the NHL if you’re smart and can skate and, most importantly, if you work hard.”

Spurgeon, still a baby-faced 28-year-old despite eight years of NHL experience, is 5-foot-9 and weighs that 155 pounds Boudreau was talking about. Yet, despite his stature, some folks who watch him nightly would contend that he may actually be the Wild’s best defenseman.

Just watch Spurgeon go into the corner or behind the net with a bigger forward. It’s Spurgeon who usually comes out with the puck.

After years and years of perfecting his craft, Spurgeon has figured out ways to compensate for his size.

“I think from a young age just watching hockey, and loving it,” Spurgeon said. “You go to the outdoor rink and try new things or even at practice. When I was younger, there was a lot more free time and not as structured practices as I think there are now. I think that's where you develop skills and learn to do different things, whether it's on the defensive side of the puck or offensive side, just jumping into plays or shielding pucks.

“Stick on puck was big for me being a smaller guy.”

But this just isn’t Spurgeon.

In today’s day and age, it’s not only the big, heavier guys who necessarily thrive in the NHL.

So do the smaller guys.

Look around the league: Calgary’s Johnny Gaudreau, who stands 5-9, is a superstar. Patrick Kane is just 5-10. Boston’s Torey Krug and Tampa Bay’s Tyler Johnson and Nashville’s Viktor Arvidsson all stand 5-9. Columbus’ Cam Atkinson and the New York Rangers’ Mats Zuccarello stand 5-8. Vegas’ Jonathan Marchessault is one of the most exciting players—he stands 5-9. Alex DeBrincat is an up and coming young, 20-year-old stud for the Chicago Blackhawks. He’s listed at 5-7.

It’s a fast league now, one where fighting has largely decreased and clutching and grabbing has all but been eliminated.

“Let’s not forget, the rule changes over the years,” said former Gophers star and Hibbing native Pat Micheletti, a 5-foot-10 North Stars draft pick who played 12 NHL games. “Back when I played, you could hook and hold. It was hard. It was hard for guys like me to get around the ice. But they’ve changed the rules, and now there's more ice, there's more freedom and the IQ, the smarts, that allows smaller guys to function.”

That is the key.

Two years ago, Jake Guentzel, who grew up in Woodbury, burst onto the scene with the Pittsburgh Penguins by scoring 16 goals in 40 regular-season games. En route to a Stanley Cup, Guentzel tied the NHL record for playoff points by a rookie with 21 and his 13 goals were one off the rookie record set by Dino Ciccarelli once upon a time with the North Stars.

Last season, as a sophomore in the NHL, Guentzel encored with 10 goals and 21 points in a ridiculous 12 playoff games.

He stands 5-foot-11 and isn’t exactly the most muscular hockey player around.

“Jake got cut as a 15-year-old for the first development process in Minnesota Hockey to get to the national level,” said former Gophers associate coach Mike Guentzel, Jake’s dad who currently scouts for the Arizona Coyotes. “Size is either overcome by competing harder and learning from it, or you give up. Everybody can choose which one, but the good ones don’t give up. I think what's happening in the game is the smaller players that are thinkers are going to continue to grow and have a chance to be really successful.”

Coach Guentzel brought up the Wild’s Nick Seeler, the former two-time Eden Prairie State Champion. As a Bantam, Seeler was undersized. He played one shift in the state title game his sophomore year. Now he’s one hard-nosed rookie defenseman.

“He was small, everybody else grew past him, and then all of a sudden he kept fighting and battling and next thing you know he ends up being an NHL player for the hometown team,” Guentzel said.

Spurgeon says it just comes down to believing in yourself. 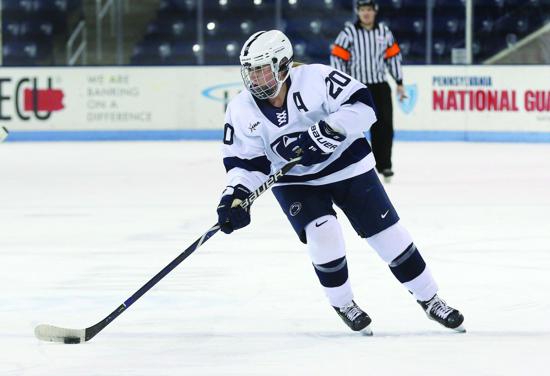 Natalie Heising from Wayzata, Minn., is 5'5" and a leading scorer at Penn State 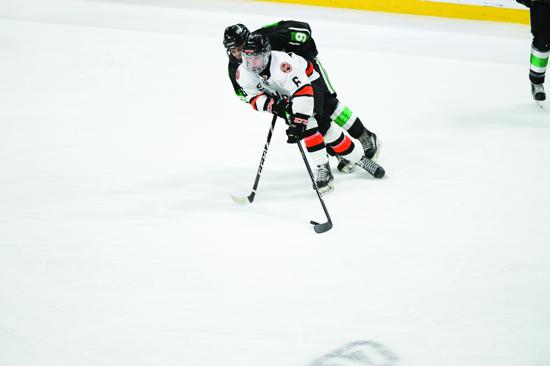 “I was told, ‘No.’ I was told, ‘No,’ a lot,” Spurgeon said. “But I didn’t quit. I worked hard and developed good habits and the skills to the point that someone gave me a chance. Many someones gave me a chance, actually. I just kept working for it. And I think that’s a good message for small hockey-playing kids in Minnesota.

“Anyone has a chance as long as you work. You can be the biggest guy with the most skill, but if you're not working, somebody’s going to pass you by. Now, with the way the game is played and how fast it is, as long as you can skate and think the game, you're going to have a chance even if you’re my size.”

Michael Russo covers the Minnesota Wild and National Hockey League for The Athletic. He has covered the NHL since 1995. He co-hosts the Russo-Souhan Show on talknorth.com and can be heard on KFAN (100.3-FM) and seen throughout the hockey season on Fox Sports North. Follow Russo on Twitter at @RussoHockey. Looking for a good gift around the holidays? Consider a subscription to The Athletic. For a 30 percent discount ($3.49 per month), go to theathletic.com/michaelrussohockey. If you’re a student, you can get 50 percent off ($2.50 per month) at theathletic.com/student.