Hanna Hughes went from not knowing a thing about sled hockey, to being an on-ice star with the Minnesota Wild and Team USA sled squads 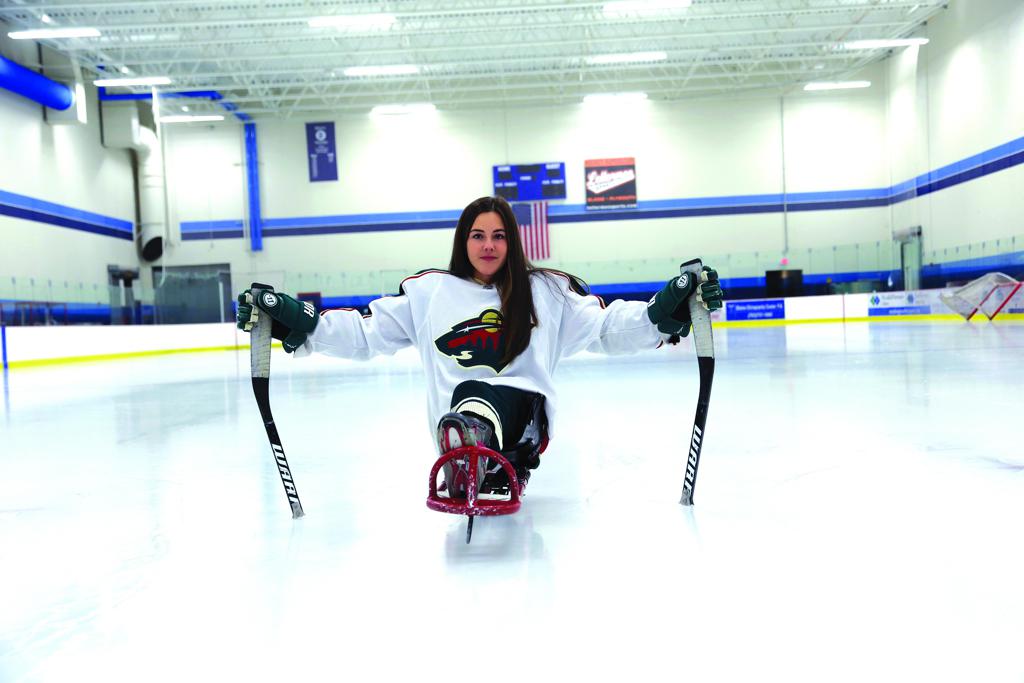 When Hanna Hughes made her way through the halls of the University of Minnesota-Duluth during her freshman year of college, she was just looking for an elevator. Along the way, a chance encounter ignited a new passion — an opportunity to pioneer a growing sport for disabled women.

Ezra McPhail, a fellow student, was also looking for an elevator. As the two searched together during their first week of school, McPhail struck up a conversation with Hughes.

“Have you ever thought about playing hockey?” he asked.

Hughes looked down at her wheelchair, and then over at McPhail’s. She thought he was joking.

“I didn’t really know what he was talking about,” she said.

McPhail took out his phone and showed Hughes a video of sled hockey.

Hughes, a former soccer player forced to stop playing a few years prior, was eager to stay active.

“I really thought my days of sports were over, so I definitely was nervous trying a new sport,” she said. “But I think I was excited, too, because I wanted to get back into something else. I was hoping I could find something again that would give me that competitive edge back.”

Those nerves quickly vanished. McPhail brought Hughes to the rink on campus one quiet morning so she could try it out. The moment Hughes got into in a sled, she knew it would be more than just a hobby.

Still today, Hughes’ enthusiasm for the sport is as strong as ever. The 25-year-old earned a spot on the U.S. Women’s Sled Hockey Team for the third consecutive year, and is determined to help grow the sport around the world.

Not that long ago, though, Hughes’ future had seemed uncertain. In an instant, her life was turned upside down.

During her sophomore year of high school, the Rochester, Minn., native was playing in her spring indoor soccer league when she started feeling pain in her right hip.

A year-round, avid soccer player, Hughes suspected a sports injury and began physical therapy to help the swelling in her hip go down. Seeing no relief, she underwent an MRI, and received a diagnosis she never saw coming: a grapefruit-sized tumor on her right hip. It was osteosarcoma — bone cancer.

“It definitely was a shock,” Hughes said. “I had been healthy growing up. I was really active, so it was a shock to everybody because that’s not something you expect for a 16-year-old.”

Hughes began chemotherapy the next day. After 10 rounds, she went in to the doctor to find out how much the tumor had shrunk.

It hadn’t. Her heart sank.

“All of that was just temporary stuff. I knew that, eventually, I would get through it and that there would be a lot of things to look forward to afterward.” - Hanna Hughes

Hughes’ best chance at survival and living a long, healthy life was to amputate her right leg, hip and half of her pelvis, which she had done in June of 2010. An additional 17 rounds of chemotherapy later, Hughes was cancer-free and she began transitioning to a new normal.

She graduated high school on time with her classmates in 2012, and prepared to attend college at the University of Minnesota-Duluth that fall.

It was hardly an easy road. There were many obstacles — new challenges and unfamiliar territory ahead. Everyday activities suddenly became completely different.

But Hughes was determined to remain positive throughout her recovery. Even in the midst of adversity, her contagious smile and upbeat attitude were unwavering.

“All of that was just temporary stuff,” she said. “I knew that, eventually, I would get through it and that there would be a lot of things to look forward to afterward.”

A few months after McPhail introduced Hughes to the sport, he brought her down Interstate 35 to the Twin Cities to check out the Minnesota Wild sled hockey team — the team he played on. It wasn’t long before Hughes’ name was added to the roster.

A lifelong hockey fan, Hughes was thrilled to finally jump into the sport she had always wanted to try.

“Having the opportunity to be able to play was exciting, because my family is a huge hockey family,” she said. “It was kind of fun to actually be able to play the sport that I wanted to play growing up.” 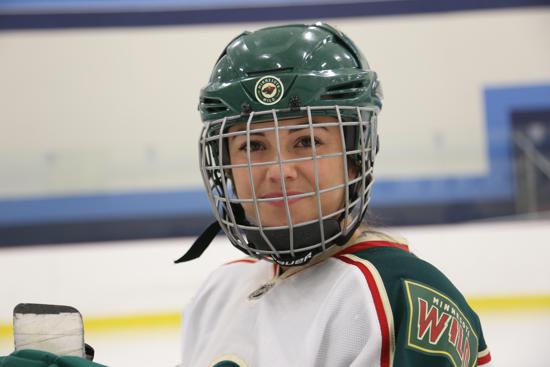 Hughes was also thankful to have a friend on the team to show her the ropes. McPhail had grown up playing hockey, but his career was put on hold when he was checked into the boards in juniors and became paralyzed from the waist down.

“Ezra knew everything there was to know about hockey, so I think I got really lucky that he was the person that I ran into, because he was so experienced when it came to the sport,” Hughes said. “He was in a wheelchair when I met him, but he can walk now, so he’s made a ton of progress.”

As Hughes practiced with the Minnesota Wild sled hockey team every weekend, she got better and better.

She was the only woman on the team — and still is — but that doesn’t faze her.

“I was definitely intimidated when I first started, because it’s all men and they’re all a lot bigger and faster and stronger than I am,” Hughes said. “But now they’re kind of all just like big brothers to me. It’s super fun, and I absolutely love it.” 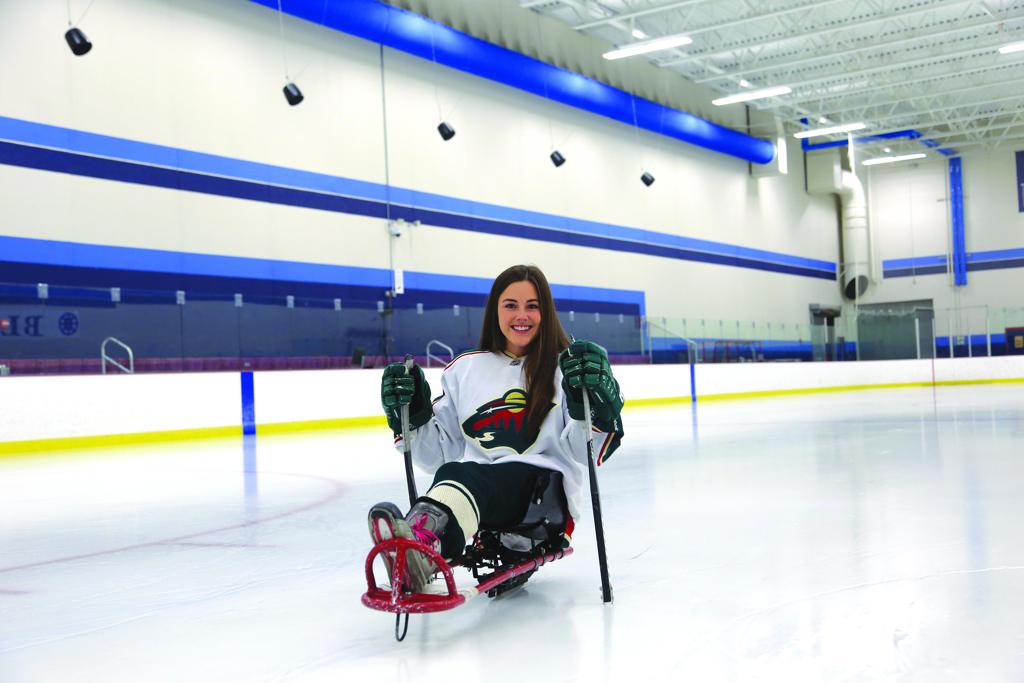 The opportunity to play with the Minnesota Wild sled hockey team prepared Hanna for the 2016-17 season, when she was named to the U.S. Women’s Sled Hockey Team.

Now in her third season in a red, white and blue jersey, Hanna competes with women from all over the country. She’s the only Minnesotan in the group — along with head coach and Duluth, Minn., native, Shawna Davidson.

“It’s kind of surreal, going from thinking I’d never play a sport again to playing a sport at this level,” Hughes said. “It’s something I never thought I’d be able to do, so I feel really fortunate to have the opportunity to do it.”

Though Hughes is used to playing with all men, the opportunity to compete with an all-female team is special.

Like Hughes, many of the women on the U.S. Women’s Sled Hockey Team are the only females — or one of a few — on their hometown teams. They only get to see each other about every month or so, but that time together is cherished.

“You can tell,” Davidson said. “They refer to it as their sisterhood and they value their time together on and off the ice. It’s a very social group, which is good and healthy. From our youngest 13-year-old, to 40-plus — we’ve got moms on the team with kids. They all embrace and care about each other and want each other to be better.”

The team often plays against sled hockey teams from different states. But this year, they’ve also had the chance to travel with the U.S. Men’s Development Sled Hockey Team and have joint practices and scrimmages with them.

Hughes said she’s grateful to compete against a squad that plays at such a high level, and sees it as a good learning opportunity for herself and her teammates. 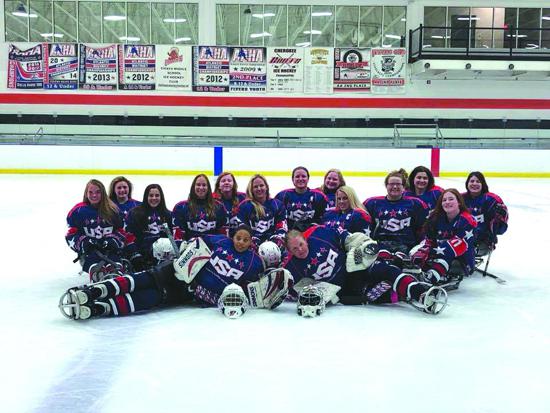 “To see how much Hanna has improved strength-wise and see that carry over to her game has been great,” Davidson said. “Hanna just has confidence on the ice and can play a more physical style for us. Just to see that she is reaping the rewards of her hard work and sacrifices is great. To maintain a balanced life, with a work schedule, social life, family, friends — finding that balance to do all of that and commit to your sport and your national team. It’s exciting to see how much she has grown and improved.”

While many of Hughes’ games are played far from home, she’s looking forward to February 2019, when the U. S. Women’s Sled Hockey Team will take on the Canadian Women’s Sledge Hockey Team in St. Cloud, Minn.

Sights on the Paralympics

The women’s sled hockey program has been in existence for more than a decade, but the 2018-19 season marks its first under full governance of USA Hockey.

For the team — and for the sport as a whole — it’s a significant step in growing the game worldwide.

“When USA Hockey announced it wanted to take the women's team under the umbrella, of course we were overwhelmed and excited about it,” Davidson said. “It’s instant credibility for the sport itself. I think that’s going to help our sport even more throughout the world.”

With enough growth, the team is hopeful women’s sled hockey will be recognized as an official Paralympic sport in the coming years.

“That has made a big difference, because obviously having that support is huge,” Hughes said, “But it’s still hard to grow the sport in other countries. We’re hopeful that within either the next Paralympics, or the one after that, we’ll hopefully be able to go.”

Hughes and her team participate in a handful of events each year. In May 2018, the U.S. Women’s Sled Hockey Team traveled to Ostrava, Czech Republic for the Women’s International Para Ice Hockey Cup — a three-team tournament against Canada and Team Europe — where it clinched the gold medal over Canada in the championship game.

While many countries don’t have enough players for a full team, international events have proved beneficial in introducing and strengthening the sport in other parts of the world.

“We’re just going to continue to be amazing ambassadors for the sport, support it and promote it in a positive light,” Davidson said. “Not only within the U.S. for the disabled female hockey players, but also anytime we are overseas or have any international event.”

Hughes has witnessed firsthand just how much the sport has grown over the years.

“I feel like every year at tryouts, we have more and more girls that are so experienced,” Hughes said. “A lot of younger girls keep coming in, so it’s really exciting to see that. We just hope that continues in other countries as well. It would be great to see it grow all over the place.” 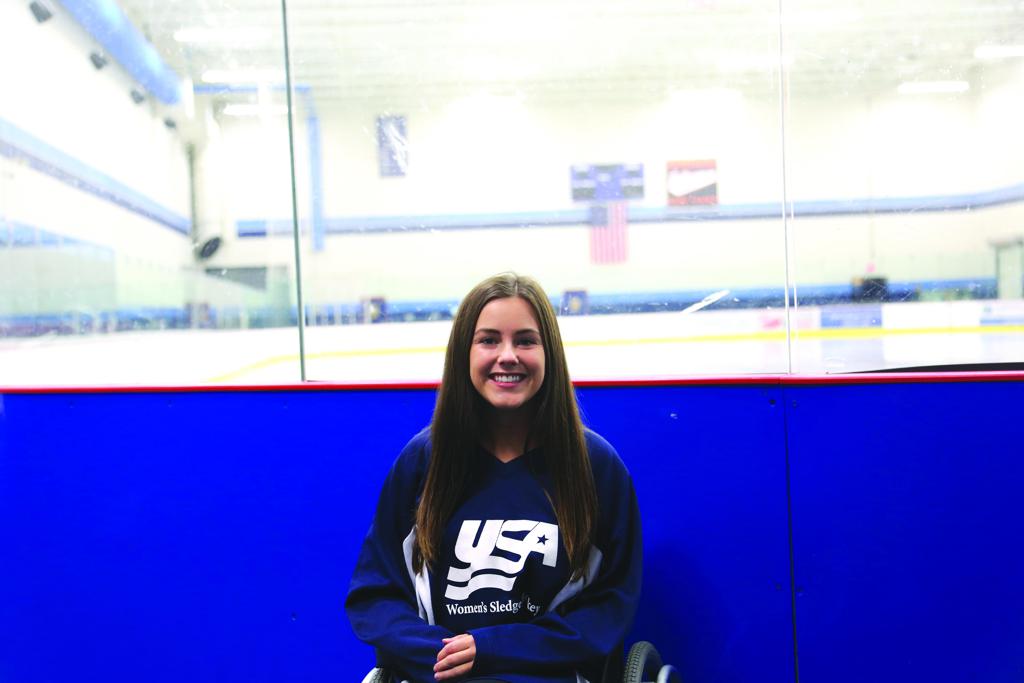 Back home in Minnesota, Hughes is eight years cancer-free and works full time at Medtronic in the Twin Cities. She also just recently completed her master’s degree this past fall.

Some aspects of her life are the same as they’ve always been since her cancer diagnosis. Others — like her outlook on life — have changed.

“I think it just makes you appreciate things a lot more,” Hughes said. “Because you really don’t know what’s going to happen, and I think I’m a pretty good example of that. You can’t really predict the future. I definitely just appreciate life in general a lot more.”

Hughes is seldom without signature smile. Especially as she remembers how far she’s come, she can’t help it.

“If you would have asked me eight years ago when I was diagnosed with cancer if I would be playing a sport again, let alone playing on the U.S. Women’s Sled Hockey Team, I would have said, ‘no,’” Hughes said. “Going to college and getting my masters degree and working a full time job — It’s just all things that I wasn’t sure I’d ever be able to do again, but I think if you really push yourself and set your mind to it, there are a lot of things that are possible. You can surprise yourself.”