Saves with a Smile 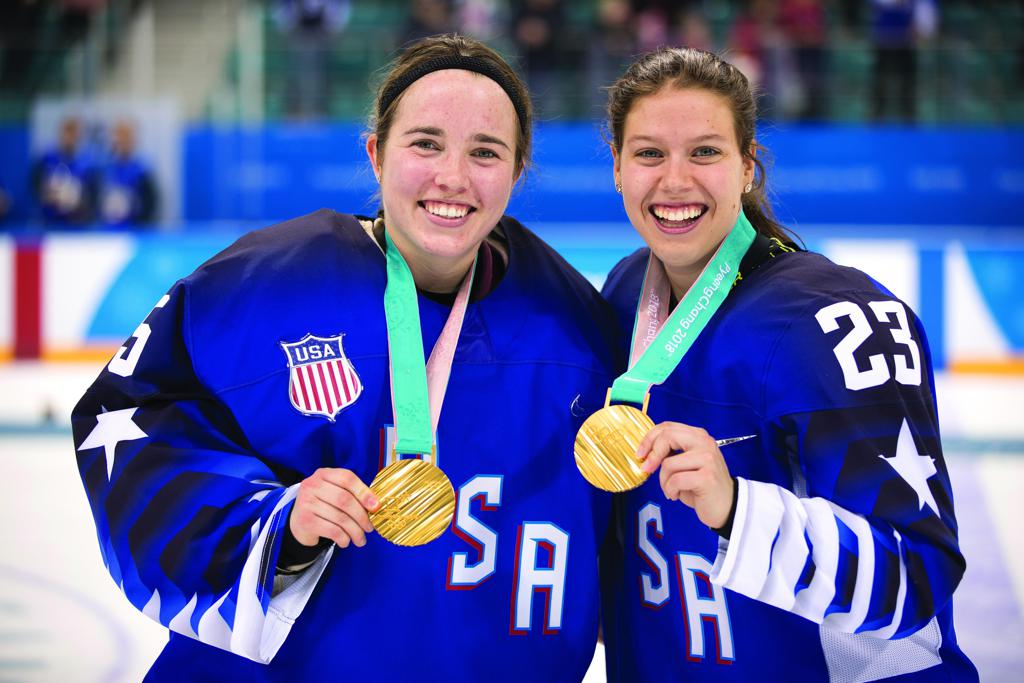 Don’t mind Maddie—she’s just enjoying the moment. Whether it’s during off-ice training or shutting down Canada in a shootout to win Olympic gold, she’s probably smiling. After a whirlwind year preparing for South Korea and a surreal nationwide media tour, Maddie is readjusting to life back at UMD, where her junior campaign is underway.

Rooney sat down with MHJ to reflect on the gold medal game, Jimmy Fallon, women’s hockey and advice for young goaltenders.

MHJ: The paddle save in overtime … how does one become so acrobatic and aware to make that type of save?

Maddie Rooney: It’s not something you should practice. My (UMD) goalie coach Chris Esposito would actually get mad at me for doing that in practice. But it’s just considered a desperation save. At that point in the moment, I thought it was going in. I thought that was going to be it. You just have to get any piece of your body, any piece of your equipment over there and do whatever you can to deflect the shot. Otherwise, that’s it. It’s battling. That’s what it is. It’s a battle.

MHJ: What was your most memorable stop on the post-Olympic media tour?

Rooney: The whole media tour in general was just very humbling for us. It was crazy to see all the support we got from all over the country. Personally, my favorite was being on Jimmy Fallon. I really enjoyed him growing up and it was just really cool to be sitting there next to him on the couch. I mean I never thought I would ever be on Jimmy Fallon or Ellen, so that was all a cool experience. 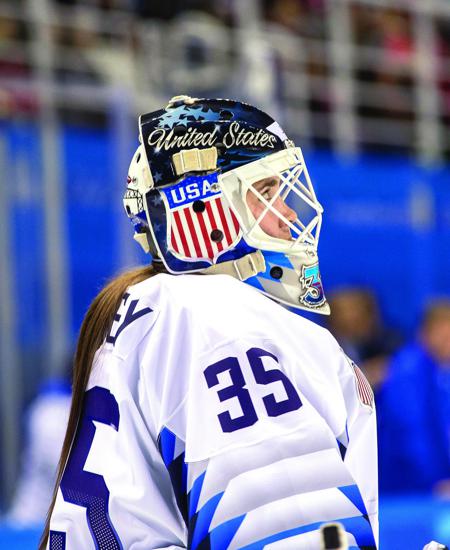 Favorite place to eat in Duluth? Tavern on the Hill
Dogs or cats? Dogs.
What’s your major? Business marketing. I want to specifically go into sports marketing. 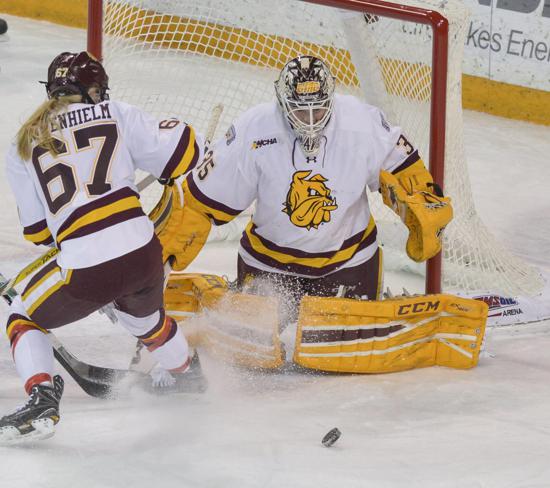 MHJ: Who is your favorite goalie?

MHJ: Always smiling? Sounds familiar. You were basically smiling during the entire shootout in the gold medal game. Is that just natural?

Rooney: I don’t even notice that I’m doing it. Even during fitness testing up here in Duluth, I’ve been caught smiling sometimes. I don’t know. I guess it’s just what I do. It might be a way that I release anxiety or stress, but I think I’m just having fun in the moment.

MHJ: Are there any coaches that have really made big impacts on your development?

Rooney: Chris Esposito helped me out when I was just starting out as a goalie, and now he’s actually the goalie coach at Duluth, so that’s been a nice reunion. Mark Manney at Andover. I was just really grateful he gave me an opportunity. He continues to be one of my biggest supporters and I would put him right at the top of my list. 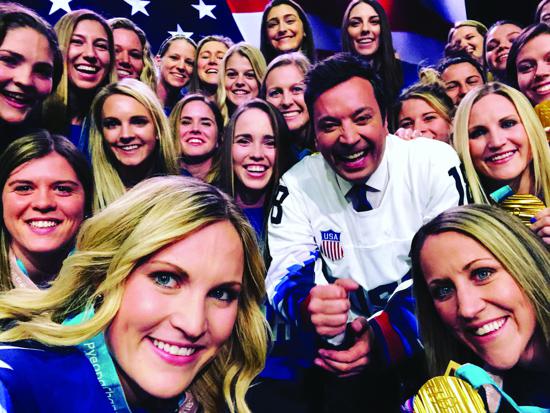 MHJ: What are your thoughts on the Whitecaps joining the NWHL? Is women’s pro hockey in your future?

Rooney: It’s huge that the Whitecaps are now in the league. Obviously, I am biased—Minnesota is the State of Hockey. I think that is huge for the NWHL and big for the sport in general. I don’t know personally what will play out for me. I still have two years to develop, so I am excited for that.

MHJ: What does the Toronto Maple Leafs’ hiring of five-time Olympic medalist Hayley Wickenheiser mean for the sport?

Rooney: I think that’s really big for women’s hockey to get that recognition from the men’s side of things. I think that will definitely start turning some heads and hopefully we’ll see more women involved on the men’s side. Hopefully the NHL will start being more involved with the NWHL—that would be huge.

MHJ: Any advice for young goalies?

Rooney: Always have fun. That’s the biggest thing for me, as you can see by the smile. You’re not going to perform well if you’re not having fun. Listen to your coaches and have a great work ethic, but have fun and enjoy what you’re doing. 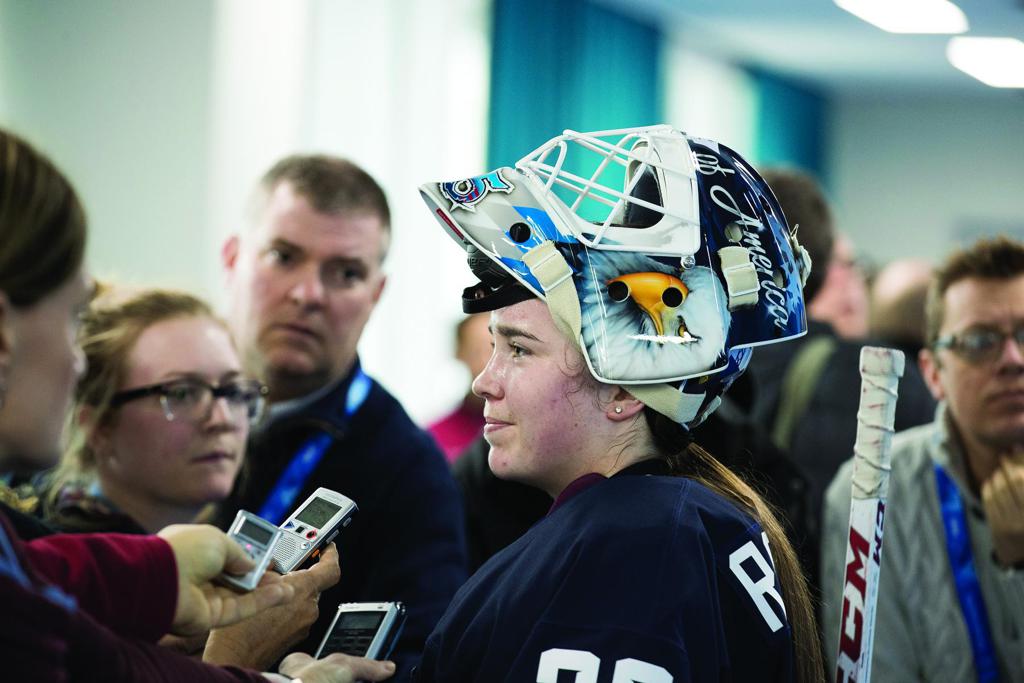