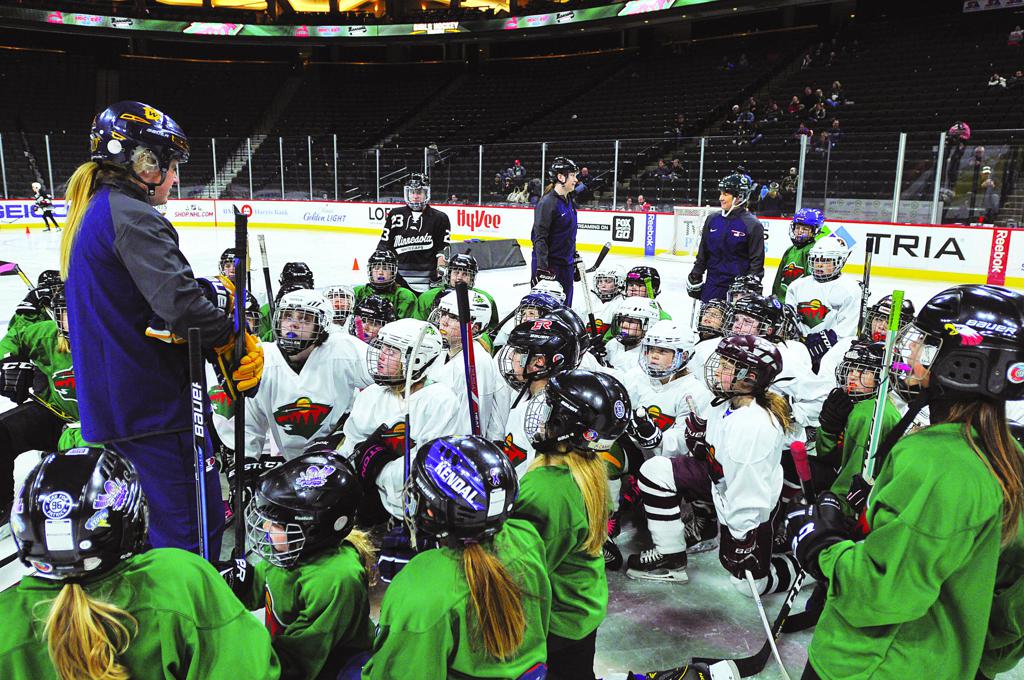 He loves to win, and he really, really wanted to win this … 12-and-Under girls’ game.

Stillwater was beating Roseville, 5-4, with a minute left when Stillwater suddenly took a penalty. Stevens called the girls over and instructed them on what they needed to do in this intense final minute to kill the penalty and win the game.

The photo was perfect as the girls—and even youth coaches—stared with wide eyes at Stevens, one of the most intimidating blue-liners to ever strap up the skates, talk animatedly. They absorbed every word, and frankly, that’s what it’s all about with just one of several Minnesota Wild initiatives to help build a greater “State of Hockey.”

A Wave of New Initiatives

Non-traditional markets in Arizona, Florida and Tennessee have been supporting programs like this for years to grow their fan base. But in the last few years, the Wild, in concert with Minnesota Hockey, have thrown a lot of weight at a multitude of initiatives that go well beyond the “Wild About Children” gala that has raised $1.4 million the past 13 years.

The initiatives really began in the summer of 2016 when Wild President Matt Majka met with Wayne Petersen to expand his role. Petersen, the Wild’s director of community relations and hockey partnerships, was given a clean slate to develop more programs that would help grow the game.

“The Wild has always been by far our biggest financial supporter,” said Glen Andersen, executive director of Minnesota Hockey. “Since 2000, nobody’s contributed more financially and been as big a supporter in general as the Wild. But it’s really ramped up the last year.”

One of the flagships is that Youth Spotlight Game.

In December, they did another pop-in, 12-and-Under B game between Farmington and Rosemount. Basically, everybody knows the game’s going to happen but the kids who are surprised to walk into the rink. The game in Farmington was a huge success highlighted by the 100-piece Farmington High School marching band welcoming the girls into the rink as they arrived.

The honorary coaches were former Wild defenseman Brad Bombardir and Wild assistant coach John Anderson, and Anderson, a longtime NHL player, has already told the Wild to count him in for next year.

“The place was jam packed on a Wednesday night,” Petersen said.

“You couldn’t even find a place to park,” added Andersen.

There are two more planned for this season, including a Peewee game. This season, for the first time, the Wild’s taking the show on the road by surprising kids outstate.

Little Wild Learn-to-Play: Four years ago, it started with eight rinks around the state and 60 kids per location. The rules: Ages 5-8, and the kids can never have had played hockey before. For $100, they get head-to-toe equipment and can attend four one-hour ice sessions once a week. Minnesota Hockey provides the coaches, and Wild players, whether it be a Charlie Coyle or a Jason Zucker, often show up to help.

“The goal is they get enough time on the ice to fall in love with the game,” Petersen said.

The program has expanded from eight locations to 12 to, this year, 16, and this year for the first time it is managed by former Wild and University of Minnesota defenseman Keith Ballard.

Ballard said it was a no-brainer to join up and “provide as many children as possible the opportunity to have fun learning the great sport of hockey.”

Andresen said that since the introduction of this type of program, Minnesota Hockey has seen a major spike for what was a saturated age group.

Minnesota had 18,002 registered Under-8 boys’ and girls’ hockey players last year, a number Andresen said is by far the most in the United States, and “we’re well ahead of that pace this year.”

“There’s no underselling how much the Wild’s impact has had on this,” Andresen said. “It’s pretty incredible, and there’s no doubt Little Wild has been a huge factor in that. Kids that attend this program and go on to play regular hockey is at 70 percent. You compare that to any other youth initiative, it’s not even close.” 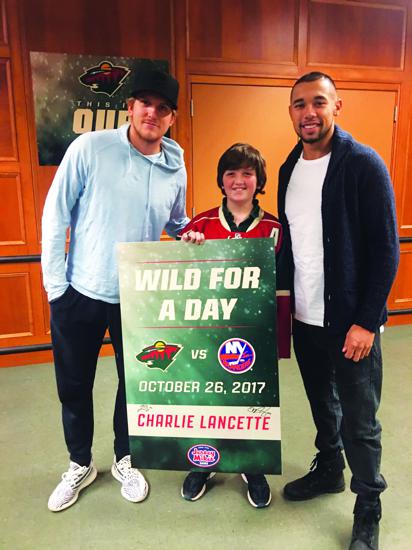 Wild For a Day: An initiative that is new this year, parents and coaches are asked to nominate a youth hockey player who is a great teammate, shows leadership on the ice and is a good student. The Wild and Minnesota Hockey choose one per month and surprises that player at practice. The player then can come to a morning skate with his or her parents, gets to meet the team, get autographs and pictures and then returns for a game where he or she is recognized.

Youth Hockey Referee Spotlight Program: As youth hockey numbers grow, so do the need for referees. Last year, in concert with the Minnesota Hockey Officials Association, the Wild arranged a meet and greet for one male referee and one female referee with two linesmen and two referees—veterans Wes McCauley and Justin St. Pierre—working a Wild game. The referees absolutely loved it, Petersen said.

“I still remember the female ref said she’d never ref a mites’ game again because people yelled at her they didn’t like a girl ref,” Petersen said. “One of the refs took her off to the side and had a heart to heart with her and told her exactly what to do if that ever happened again. It was just really cool.”

Once a month, one male and one female ref is chosen to be honored at a Wild game. Each honoree gets to skate out onto the ice in their zebra stripes with the officials before the game.

The Wild have also started a Level I Youth Hockey referee recruitment seminar and clinic. On Sept. 30, there was a day-long clinic to get their Level I certification and it culminated with a Q-and-A with NHL referees Dan O’Halloran and Kendrick Nicholson and NHL linesmen Brandon Gawryletz and Brian Mach, who hails from Little Falls and has worked more than 1,000 NHL games.

“We had kids driving four hours to attend,” Petersen said. 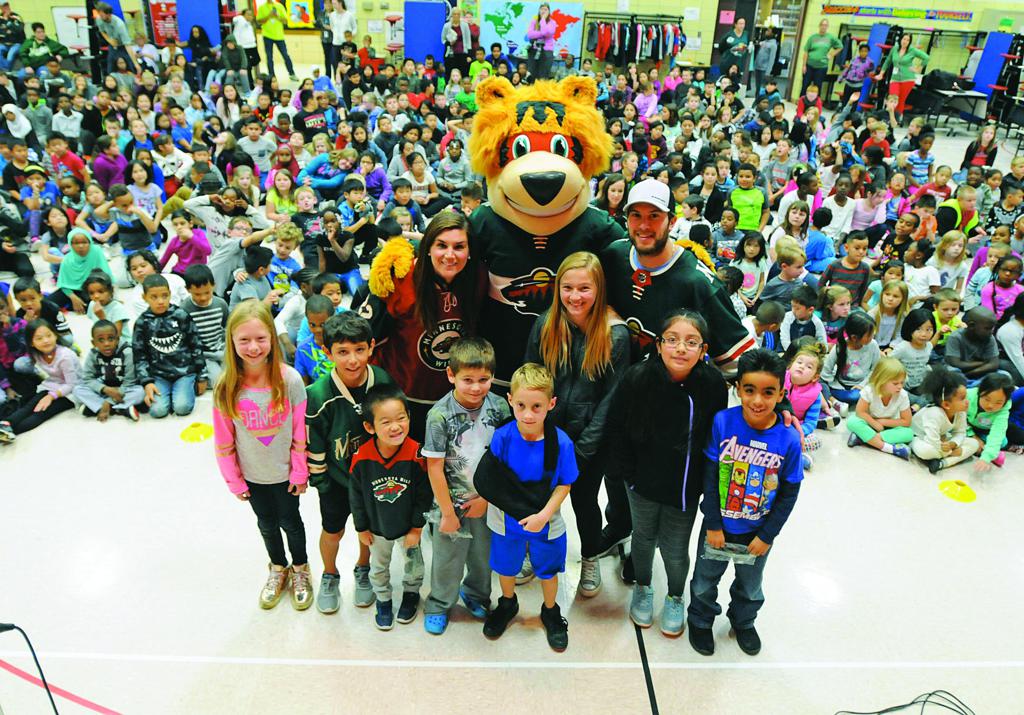 Faceoff For Fitness: This is Year 2 of this initiative. Last year, the Wild did six. This year, they’re doing 12 assembly visits at local elementary schools. The goal is to promote physical fitness, nutrition and healthy lifestyle choices. Former Wild captain Wes Walz and former Gophers player Erica McKenzie has taken part, and it’s a 45-minute school visit that culminates with Wild cards with different fitness and nutritional tips on them. The Wild also donates a set of street hockey equipment to the school’s PE program.

Girls Hockey Weekend: From Dec. 15-17, the Wild celebrated the growth of girls’ hockey at Xcel Energy Center. It started with former Gopher Krissy Wendell practicing with the Wild and included a special ticket pack for the Dec. 16 Wild-Oilers game and ended with 8U, 10U and 12U on-ice clinics and a pizza party.

“In both numbers and talent, Minnesota is way above everywhere else when it comes to girls’ hockey,” Andresen said. “But there’s still far fewer girls than boys playing, so we’re just trying to find ways to get more girls interested in the sport.”

Fall Mite Jamboree and Mite Holiday Jamboree: Consists of 32 teams of both 8U girls and boys, and it’s amazing how quickly the small-area game field fills up. Last year, the Wild sent out the release on a Monday and opened registration at 10 a.m. on a Wednesday. By 10:02, the jamboree was filled and the Wild’s system crashed.

Minnesota Wild Leadership Summit: 238 boys and girls high school hockey captains and coaches representing 56 schools from throughout Minnesota and Wisconsin attended a Leadership Summit on July 11 at Xcel Energy Center and Saint Paul RiverCentre, the first of its kind in Minnesota and throughout the NHL. There were a number of speakers, then the captains and coaches got to attend a Wild development camp scrimmage. The Wild anticipate the numbers to increase dramatically this upcoming summer.

As you can imagine, to organize this many youth initiatives, it takes a lot of time, money and manpower.

“I remember when I first met with Wayne and we talked about all these programs, my thought was, ‘Let’s do one of these a year or something and roll them out slowly,’” Andresen said. “Wayne said, ‘No, let’s do them all right now.’ It’s amazing how these things get pulled off, but it’s all been worth it. We see a lasting impact, and the entire goal is for everybody in the State of Hockey to fall in love with this sport.”

After 12 seasons covering the Minnesota Wild for the Star Tribune, Michael Russo now covers the Wild and National Hockey League for The Athletic (theathletic.com/mn). He co-hosts the Russo-Souhan Show on mnspn.com, can be heard on KFAN (100.3-FM) and seen throughout the hockey season on Fox Sports North. Follow Russo on Twitter at @RussoHockey and subscribe to The Athletic at a special discounted rate at theathletic.com/michaelrussohockey.