Every hockey player has his or her own story. Some grew up on the Iron Range, learning to skate on the outdoor pond, while others share experiences of Bloomington Ice Garden or All Seasons Arena in Mankato. You've probably been to all of these places if you're a hockey family in Minnesota.

But if you want to hear some truly remarkable tales about the love of the game, sit down with any member of a Minnesota sled hockey program and prepare yourself.

"Hockey changes lives -- that's our theme," said Larry Hendrickson, father of Minnesota Wild assistant coach Darby and founder of the Hendrickson Foundation, which is devoted to promoting growth of disabled hockey in Minnesota. "Hockey players are hockey players and these (sled) players are very skilled athletes.

"Everyone deserves a chance to play hockey."

Working in conjunction with USA Hockey and Minnesota Hockey, Hendrickson and the foundation have created a way to ensure players are able to keep that competitive spirit alive. Some players were born with their disabilities and birth defects while others lost what many of us take for granted later on in life. One thing they haven't lost is the passion for hockey.

"They've lost something that you and I have never lost," said Hendrickson, a former North Stars strength and conditioning coach and legendary high school hockey coach. "But each and every one of them, parents included, light up when they are on the ice.

"It's the fun of the game and is a vehicle that brings out the happiness for them."

Hendrickson says he wants more players to share in that joy. Currently four sled hockey programs exist within state borders: Moorhead, Twin Cities, Duluth and recently added Rochester. With the help of players familiar with the sled program, awareness is slowly starting to seep out. Hendrickson and all those involved in Minnesota sled hockey hope that it brings out more players to join the programs.

"What's really incredible about every one of these athletes, is when something goes wrong they not only fight back for themselves to return to 'normalcy,' but (they fight) to help others in similar situations," Hendrickson said. "That's the spirit of the (sled) program and it's so much fun to be around.

And that common thread is a love for hockey. 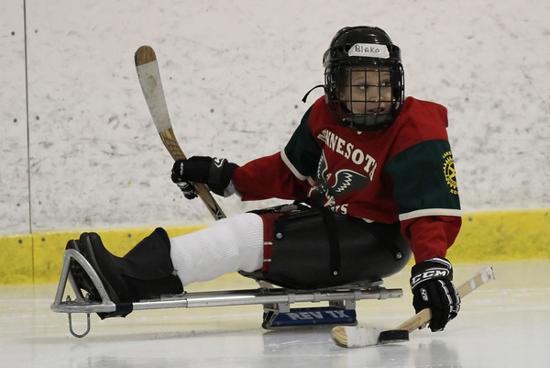 "They've lost something that you and I have never lost. But each and every one of them, parents included, light up when they are on the ice." - Larry Hendrickson

Ezra McPhail was most comfortable on the ice. He earned his way into the NA3HL junior hockey league with high hopes of playing college hockey. But in December 2011, Ezra suffered a paralyzing hockey injury. He would never skate again.

"I arrived (at camp) and quickly learned it was the same as an able-bodied camp," said Ezra. "I also learned the way I play in both sports is the same."

Ezra shone at camp, being named to the U.S. National Development Sled Hockey team roster. Next up on his list of goals: the 2016 Paralympics.

Zoe Wren had to overcome her fair share of struggles, starting at birth. The now 14-year-old was born three months early after her mother suffered Preeclampsia. Zoe entered the world weighing in at just 2 pounds, 7 ounces. At 14 months old she was diagnosed with Cerebral Palsy.

But that wasn't going to stop Zoe.

She found sled hockey at the age of 5 and has been steadfast on the ice ever since. Sled hockey has brought out the outgoing and confident kid inside. She is able to interact and play with kids who have faced similar adversities in the Moorhead recreational league.

Tyler Shepersky was born with no muscles in his legs. Diagnosed with Arthrogryposis, a constriction of the joints, at a young age, Tyler's hips, knees and ankles have limited use. He has been bound to a wheelchair full-time.

Despite that, Tyler still thrives on the ice. He added sled hockey to his list of favorite things when he picked up a sled and stick three years ago.

Tyler and his family drive 90 miles one way to get to sled hockey in Moorhead each week. It's the same determination to get to the rink that Tyler keeps in looking at his future. He aspires to play sled hockey in the Paralympics someday.

Hannah Hughes has triumphed over adversity at an age when other things are usually more prevalent. Diagnosed with a rare form of bone cancer in 2010, Hannah spent the past four years undergoing 27 rounds of chemotherapy and multiple surgeries, including one that forced the amputation of her right leg at the hip.

An avid soccer player, Hannah thought her sports days were gone. In 2012 she found sled hockey.

"When my world was opened up to sled hockey, everything changed," Hannah said in a scholarship application essay. "I was instantly hooked on the sport and I could not get enough of it."

She quickly excelled on the ice, where her competitive edge once again thrived. She joined the Minnesota Wild Adult Sled Hockey team in 2013. Like so many hockey players out there, Hannah has realized how hockey has made her strong and helped mold her into more than just a young athlete.

"Hockey has played such a large role in who I've become," she said. "It has taught me that despite my disability, anything is possible. It has given me that drive to never give up.  My dream is to play for the USA Women's Sled Hockey team some day. I know that if I keep working hard, that dream will become a reality." 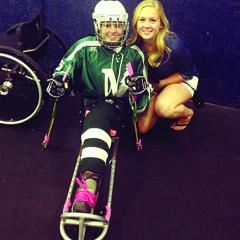