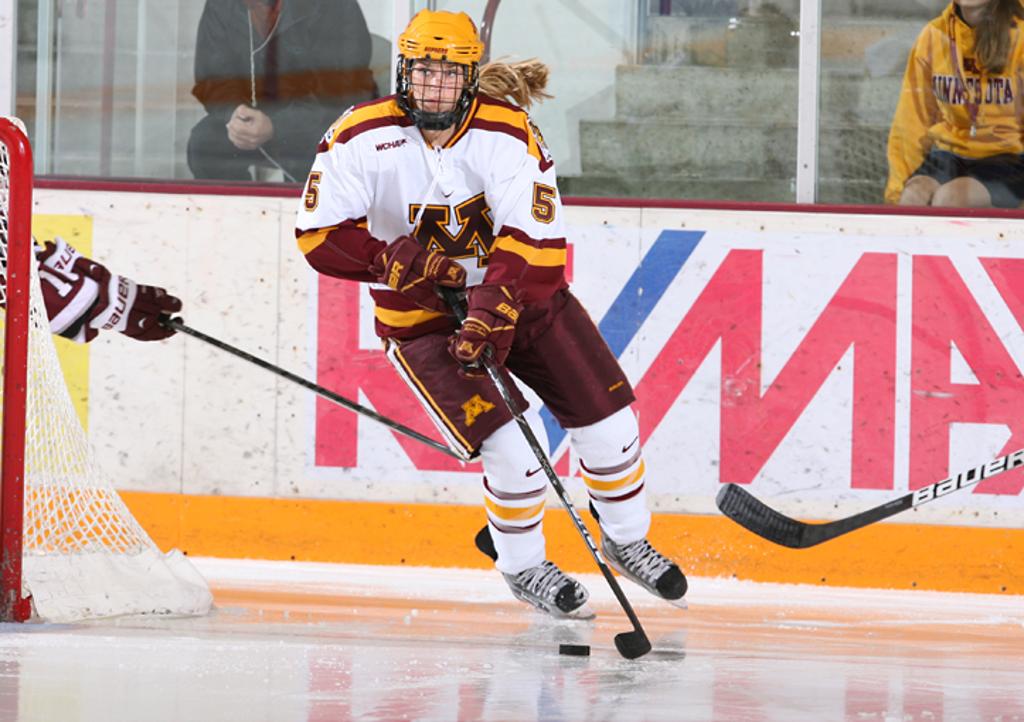 You’ll find a lot of the “M” in the Ramsey household. Mike Ramsey won an NCAA National Championship with the Gophers in 1979. His son, Jack, is a Gophers recruit and current junior for the Minnetonka Skippers. And then there’s Rachel, a sophomore defenseman at the University of Minnesota, who won a high school state title with the Skippers in 2011 before helping the Gopher women capture the NCAA title last year.

Rachel and the Gophers are putting on a record-setting display at Ridder Arena and beyond. They finished the first half of the season 20-0, continuing NCAA-record 28-game unbeaten streak dating back to last season.
Rachel tallied 11 points (2g, 9a) while registering a meaty plus-24. She finished with 25 points as the WCHA’s top-scoring freshman defenseman last season. The Minnesota Hockey Journal caught up with the steady blue-liner.

MHJ: You haven’t given up more than two goals in a game yet this season while recording 11 shutouts. That’s unprecedented. As a defenseman, you have to be pretty proud of those numbers.
Rachel Ramsey: It’s been a pretty great year. We have a really gifted defensive corps, especially with Noora Räty in net. All of us are pretty proud of those numbers. It does say something about how hard we work in all ends of the ice.

MHJ: Both being defensemen, how much of an influence does your dad (former NHLer, NCAA Champion and Miracle on Ice defenseman Mike Ramsey) have on your game?
RR: Growing up, I didn’t listen to him as much as I probably should have. Just because he was my dad, you don’t want to listen to everything he has to say (laughs). When I switched from forward to defense in high school, I think it was good timing. I finally knew what he was talking about. He’s very good at analyzing the game and helping me with the little things.

MHJ: So you weren’t always a defenseman? Why did you transition from playing forward to defense?
RR: My coach in high school wanted to throw me back there. They figured in the high school game that I could do just as much offensively on the blue line as I would up front. We needed defensemen.

MHJ: Do you feel your overall skill set and value to your team have increased since you have experience at both positions?
RR: Yes. I feel like I know where forwards are going to be on the ice. Granted, if you threw me up front right now, I don’t think I’d do too well (laughs). But it has been very cool to play both positions and have an overall feel for the game.

MHJ: What can you say about the community-based structure in Minnesota, where you have that opportunity to grow up and play with your friends in your community?
RR: It’s really a blessing, especially talking to girls out of state who play with girls from all over and have to travel all over the country. To be playing for your high school or your town with a group of girls that you’ve been playing with since you were 10 years old – it’s really something special. It makes those wins and losses and just the whole journey of youth hockey a real unique experience.

MHJ: Do you ever get out to your brother’s games?
RR: Oh yeah – quite a few of them. My sister and I get to a lot of those games and it’s really fun just to go back to the Minnetonka community and see all the adults and kids you know. Especially the boys’ high school games in Minnesota. They’re just really special. They’re something the community really rallies around.

MHJ: Safe to say there’s a lot of Gopher and Minnetonka gear in the family household …
RR: There definitely is. Especially when my brother gets up to the rinks here, I’m pretty excited to see him in a Gopher jersey. Until
then, the Minnetonka “M” is a pretty special “M” to wear as well.

MHJ: Best hockey advice you ever received?
RR: Just have fun. The older you get, the more pressure gets put on you. If you lose the aspect of having fun, it all just becomes a lot of pressure and a really hard game to play.