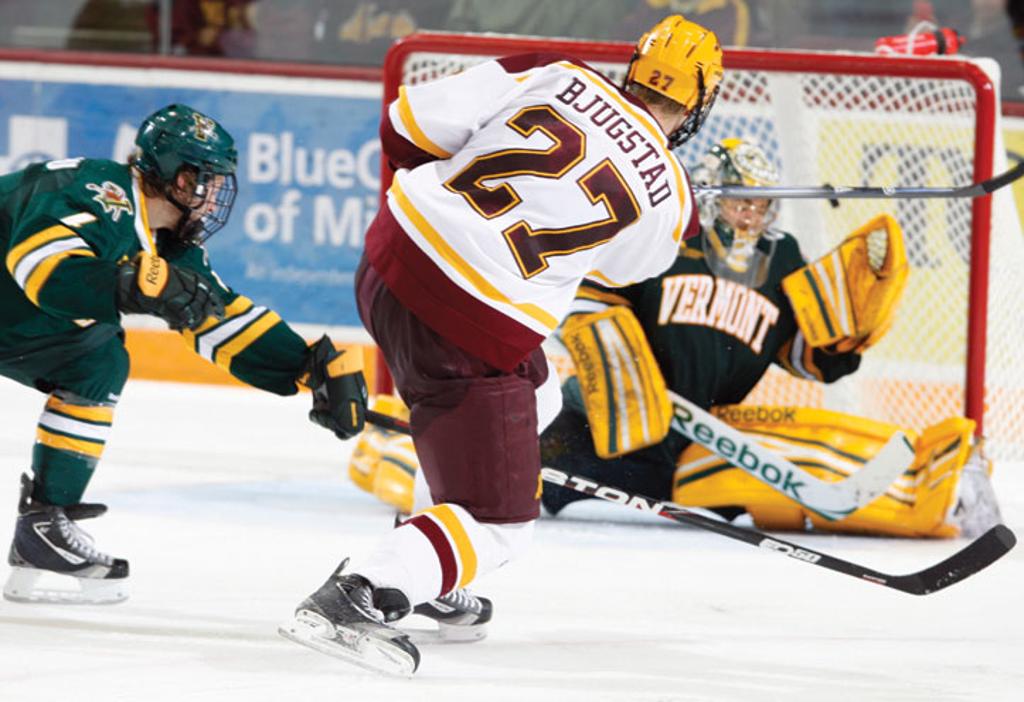 “If we didn’t have all the good youth programs growing up here, I really don’t think we’d have that success with the Gophers.”

Excitement surrounding the Gopher men’s hockey program returned to traditional levels with a Frozen Four appearance last spring. With a strong core returning, expectations remained high for 2012-2013. But when it was announced Nick Bjugstad would opt to wait on pro hockey for a return to Dinkytown this fall, the new scoreboard in Mariucci Arena almost exploded.

The Blaine Youth Hockey Association product sat down with the Minnesota Hockey Journal to talk Gophers, youth hockey in Minnesota and the benefits of playing multiple sports growing up.

MHJ: You’ve spoken publicly about both the pride in the Gopher program and relationships with your teammates as big factors in your decision to return to school.
NB: I’ve never cheered for another team. Even though my uncle (former NHL’er Scott Bjugstad) played here, I think it would have been the same. I think we all grow up idolizing the Minnesota Gophers. I never really thought about playing in the NHL. I always thought that was kind of a far cry. I just looked up to the Gophers and watched them win national championships in 2002 and 2003 – it was awesome.

MHJ: Do you think the Gophers would have all their success and tradition without all the community-based youth hockey programs in Minnesota?
NB: If we didn’t have all the good youth programs growing up here, I really don’t think we’d have that success with the Gophers. Obviously, we could recruit outside, but I think it’s the tradition and the culture here. The intensity and the love for the game in Minnesota at the younger levels and the higher levels are just bar none in the country.

MHJ: I’m sure you’ve met quite a bit of hockey players from all over the country. Do they ever ask you about the culture here?
NB: They always realize who the Minnesota guys were because we always travel in a big pack. A lot of guys didn’t like it. We just all traveled together even though we weren’t on the same team. We were just from the same state and shared some of the same experiences. People are kind of surprised at the way we’re just a tight-knit community.

MHJ: Ever think about your time in the Blaine program?
NB: I loved every minute of it. I shared a lot of good experiences. I’m still best friends with a lot of guys from my teams when I was younger and in high school.

MHJ: Did you play other sports growing up? Or was it all hockey all the time?
NB: I grew up playing all the sports. I got to play football, basketball, lacrosse, golf. In high school I figured hockey was my passion and if I wanted to go onto the next level I would just focus on one or two sports.

MHJ: Do you think playing all those sports as a young kid helped with your overall athletic development?
NB: Hand-eye coordination in every sport’s a little different. I think it really helps you. It’s important. I’d play hockey in the summer in tournaments but I wasn’t on the ice constantly.

MHJ: Working on any part of your game for the upcoming season?
NB: I’m always working on my shot with my uncle Scott. I shoot a lot of pucks with him. I need to work on my quickness. Obviously I’ve hit a growth spurt these past four or five years. I’m taller and I need to get a quicker start, so I’ve been working on that in the weight room with Cal Dietz, our weight trainer. Hopefully it pays off.

MHJ: Gopher fans hope so, too.