Chanhassen brothers Mike, Connor and Ryan Reilly have each grabbed hockey headlines this week. The future Gophers have lit up the British Columbia Hockey League this season with the Penticton Vees, who are currently battling their way through the playoffs.

The former Shattuck-St. Mary’s star tallied 24 goals, 59 assists for 83 points in 51 games, including 14 power-play and four game-winning goals. He led all BCHL defensemen (two conferences, 16 teams) in scoring. It is the second-best points total in the organization’s history. The 6-foot, 165-pound offensive defenseman registered two four-point games and one five-point contest during the regular season.

The 18-year-old was drafted 98th overall by the Columbus Blue Jackets in the fourth round of the 2011 NHL Entry Draft, which was held in downtown St. Paul at Xcel Energy Center. The Columbus fanbase has certainly taken notice.

A Blue Jacket fan website, The Cannon, profiled Mike recently as a prospect to get excited about. From The Cannon: 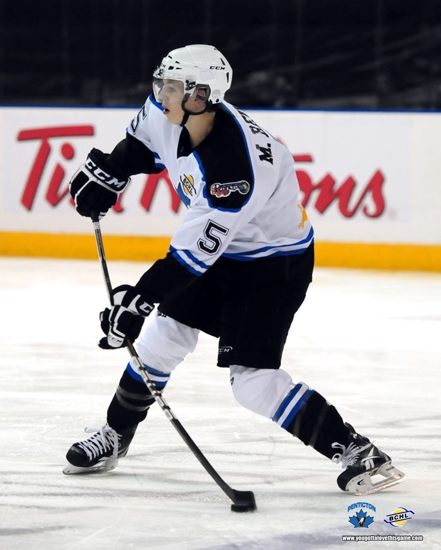 “Reilly and the Vees open the playoffs with a best-of-seven series against the Chilliwack Chiefs starting on Friday. It will be very interesting to track both he and the team as they march toward a league title, and hopefully a chance to vie for the Royal Bank Cup, the Canadian Jr.A championship.

Even more interesting will be to monitor Reilly when he makes the jump to Minnesota next season. If he can translate his offensive success to the Gophers, he won't be on the standard four-year development plan. He'll be signed by the Jackets, and he'll have time to develop in the AHL. With continued success at that level, the ultimate jump won't be far behind -- the Columbus blueline.”

The Vees finished a staggering 54-4-0-2 in regular-season play. They posted a record-shattering 42-game win streak in the heart of the 2011-2012 campaign. Their success has been fueled by Mike and his older twin brothers Connor and Ryan, who graduated from Holy Angels.

It's not currently the best of times for Connor Reilly, underwent knee surgery recently and will be shut down for the remainder of the season. He did, however, score 35 goals and 51 assists for 86 points in 54 games before the surgery. Connor registered a six-point game against Westside and tallied 16 power-play goals and five game-winners this year. He plans on being ready for the Gophers when practice begins next season. Stay tuned to the Minnesota Hockey Journal for details as his recovery progresses.

Ryan Reilly potted 32 goals and 41 assists for 73 points in a Vees uniform. He recorded two four-point games and came up with a hat trick against Salmon Arm in the middle of the season. Ryan scored six power-play goals, two short-handed and four game-winning goals for Penticton this year and will battle for a regular spot in the Gophers lineup next season.

The left-handed Reillys are not the only local boys powering Penticton.