Catching up with John Harrington 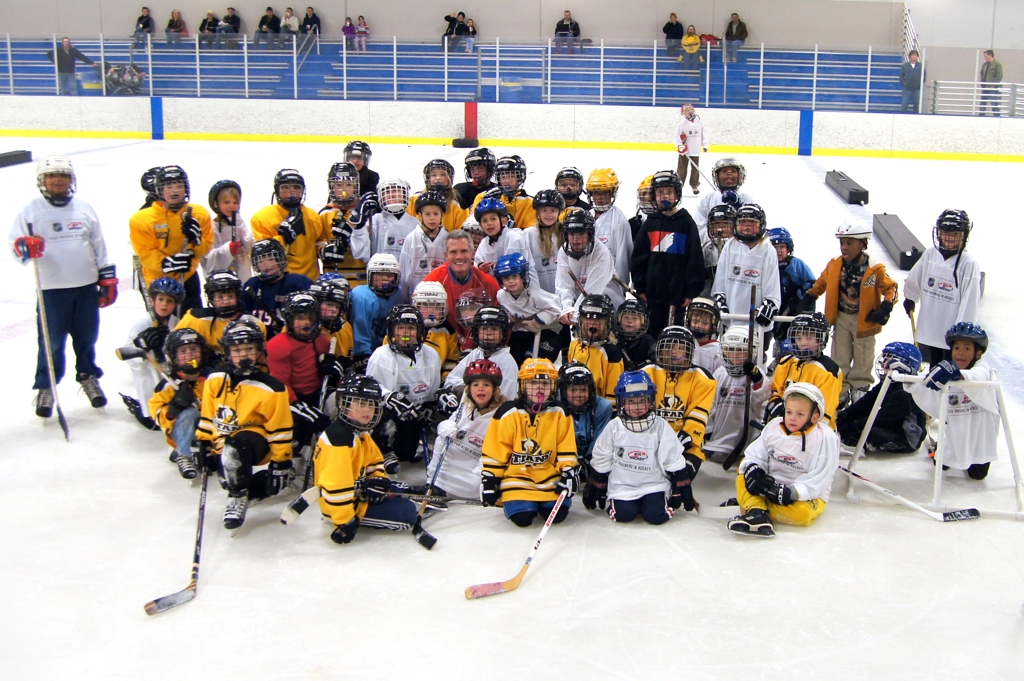 John Harrington takes a knee with dozens of Minneapolis kids who were taking part in the City of Lakes Hockey Association's "Try Hockey for Free" day in November. The Herb Brooks Foundation participated in these and other events to keep inner-city hockey

Former 1980 Gold Medal Olympian and Miracle on Ice forward John Harrington had some great coaches. Then he became a coach – and a darn successful one at that.

Harrington served as an assistant at Denver University and St. Cloud State University before leading Saint John’s University to five MIAC titles and five NCAA tournament appearances. He spent the last few years coaching in Switzerland, Italy and the Slovenia before returning to the State of Hockey.

The Virginia, Minn. native was recently been named Hockey Director at the Herb Brooks Training Center, which includes duties with FHIT Players, a leading hockey advancement and development group, along with assisting the Herb Brooks Foundation in growing the game of hockey.

The Minnesota Hockey Journal sat down with Harrington to discuss his variety of roles, including working with inner-city kids.

MHJ: What exactly is your role with FHIT Players?

JH: I’m the Director of Hockey Development. My job is to make the coaching better. I’m essentially coaching the coaches there. Providing the knowledge I have and certainly combining it with what they have. We’re trying to come up with a better coaching program to improve our players.

MHJ: You’ve also been working with the Herb Brooks Foundation, playing and teaching inner-city kids in the Rink Rat program.

JH: I’ve had a chance to go down to some of the schools where Janet Marvin’s done a tremendous job organizing that and getting the kids involved. It was a great experience. The kids are excited to play. They look forward to that after school.

MHJ: That must be a lot different than working with college and other younger, more skilled players. How has that experience been working with younger, less-privileged kids?

JH: It’s great. You can make a difference in those kids’ lives. You can talk to these kids about some hockey things and have fun doing that and seeing that joy, but maybe get a chance to talk to them about something else or to impart some life experiences to them. Something they might take and use as a life lesson.

I talk to them about hard work and what they could accomplish if they stick with it. You can make a difference in their life instead of making a difference in your own life.

MHJ: You’re also scouting USHL games for the Colorado Avalanche. You are a busy man.

JH: I have an opportunity here to get involved a little bit in pro hockey, which certainly interests me. It’s been fun.

Certainly working with FHIT Players up here, it’s tied in, because it’s about looking and watching players and recruiting them. It’s been a great experience to learn a little bit more about how that business works and scouting their players and getting ready for the draft in June.