Lou Nanne has been involved in every aspect of Minnesota hockey.  From the day he arrived at the University of Minnesota to play for the legendary John Mariucci, Nanne became woven into the fabric of the sport playing, coaching and managing the North Stars. This season Nanne will watch his grandsons try to win the state’s highest honor, a high school hockey tournament title.

FOX-9 Sports Director Jim Rich had a candid conversation with “Louie” about the state of the game in the State of Hockey.

Jim Rich: Let’s start with youth hockey. Your sons came up through the ranks and now you are watching your grandsons. If you could change one thing, what would it be?
Lou Nanne: I wish in the real minor levels — Mites, Peewees and Squirts — that they would have delayed offsides calls. The lower levels are playing with a one-hour clock and it’s easy to waste six minutes of playing time with whistles. You really don’t want to take ice time away at these levels. Overall, I feel Minnesota has done a marvelous job and is at the forefront across the country. 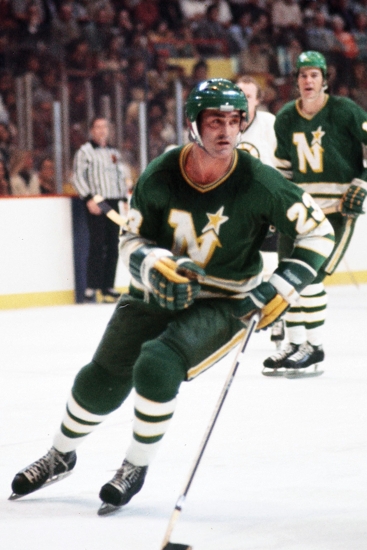 JR: Do you consider yourself now the “Godfather of Hockey” in the state of Minnesota, with the likes of John Mariucci and Herb Brooks no longer with us?
Lou: I only look at one guy as the “Godfather of Hockey” and that’s Mariucci.  No one did more for American hockey than John, and I have him on a pedestal.  He fought for the American boy, but it wasn’t like he hated Canadians because he told me, “If I did hate Canadians, why would I have recruited you?” John was very unique. He was like my second father.

JR: Of the books you have authored, which chapter is your favorite or a must read?
Lou:  I have something in each of them I really like and treasure, so it would be tough to pick one. My books, “ The History and Memories of the Minnesota North Stars” and the “Passion to Win” all are parts of me, and I really wouldn’t want to give up any of them. They deal with my days growing up, to the U, to the Olympics, to the North Stars, to the world of business. It’s all me.

JR: Growing up in Sault Ste. Marie, Ontario, what was one of your most memorable hockey moments?
Lou: My final year in juniors, I played with Phil Esposito, and his uncle sponsored the team. We were undefeated and in the playoffs, and it was the first time my mom ever came to one of my games. All of those years and she never came to see me play, but that’s just the way it was back then. So in the game, I hit this guy with a hip check and he flew over my back. But as he came down his skate caught me above my eye. When you are cut around the eye you bleed pretty good, so I looked pretty bad.  As I was skating off the ice my father got up and my mom said, “Mike, where are you going?” He said, “I’m going to check to see if he’s OK,” to which she replied, “You’re not a doctor. Sit down!”

JR: You’ve called the state tournament for 47 years on television, including games with your son and grandson on the ice. How do you rank those moments?
Lou: I think I was actually more nervous watching my grandson than my son, but it was a thrill to broadcast both.  They were the toughest games I ever had to broadcast, because in order to do my job I had to concentrate on not just watching my family but everyone on the ice. My son Marty scored the winning goal in the state championship game and all I said was, “Nanne followed the play up ice and buried it to put Edina ahead!”

JR: The demise of the WCHA — is this a good thing or a bad thing?
Lou: I am very concerned about the status of teams like Bemidji State and Minnesota State-Mankato; also teams like Ferris State, Lake Superior, Northern Michigan and Michigan Tech. College hockey needs to make certain that these clubs play good teams in their buildings so they get big crowds and make money for the programs.

JR: Could it actually hurt the University of Minnesota, not playing their regional rivals like North Dakota, UMD and St. Cloud State?
Lou: You can’t say it’s not going to hurt Minnesota if they aren’t going to play their rivals like North Dakota.  Two of your best draws are Duluth and North Dakota, and the Sioux and Bulldogs have been their top rivals since the days when I played.  If I had a say, I would figure out a way to play those teams every year so at least they get them at home every second year.

JR: What about the Wild?
Lou: The Wild have set themselves up really well for the future.  I think Chuck Fletcher has done an outstanding job of filling up the roster in the minors with players, and the club has drafted some really outstanding prospects and Europeans like Mikael Granlund.  The Wild may have the best overall talent in their system coming up. They might not have the number one, two or three guys, but overall they have outstanding talent waiting to join them in the future.