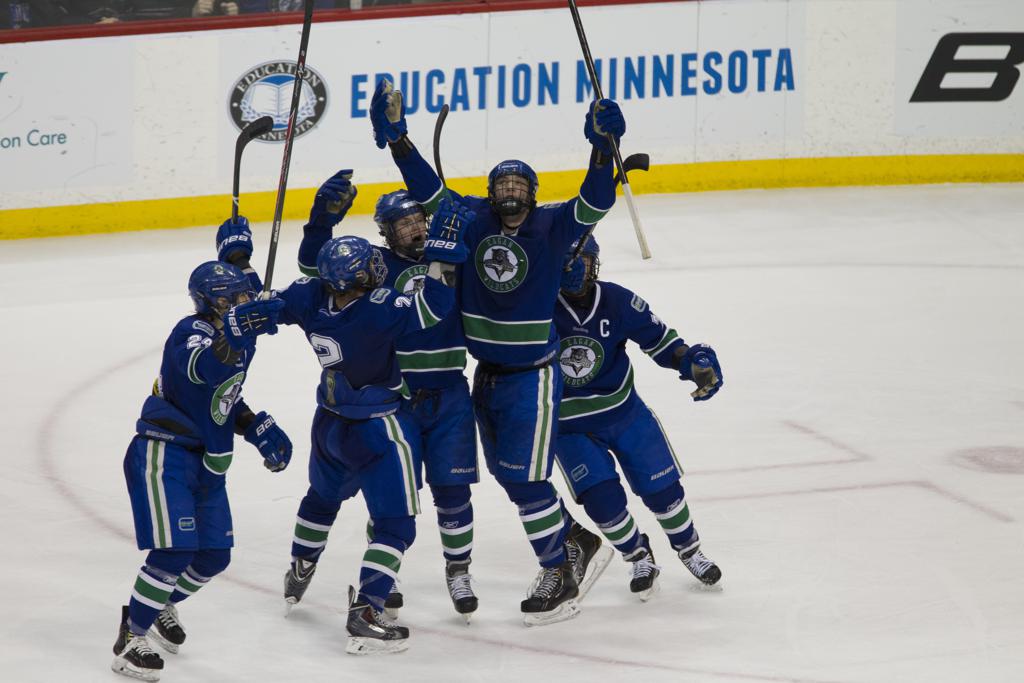 Over the holiday break, two former teammates and good friends made the most of their chance to return home to Eagan and get together before the final half season of their college careers.

It wasn’t reliving old glory days. Tommy Muck and Nick Wolff each continue to make their own, six years after leading the Wildcats to the Minnesota State High School Class AA Hockey Tournament.

Minnesota’s northernmost DI college teams call the 218 area code home yet both Bemidji State and Minnesota Duluth find themselves this season with leaders from the 651. A pair of hard-working defensemen tough to play against, the puck-moving Muck wears the “C” for the Beavers along with Adam Brady. Wolff, standing 6’5” before skates and physical when on them, serves as UMD’s co-captain and veteran voice on the blue line.

“To see both of us have success at the next level means a lot,” said Wolff. “Obviously, (Tommy) is a (heck) of a leader and that’s why they chose him to be captain at Bemidji. He’s just a phenomenal guy.”

Leadership means more than a letter or honor received. Muck, who was voted captain by his fellow BSU players, feels the role comes with added responsibilities and pressure. To him, the honor is in having the trust of his teammates.

Leading by example and having a strong work ethic are takeaways the 24-year-old took from his time at Eagan, when he learned from experience about the mentality it takes to be a leader. Muck’s been able to keep them throughout his development, putting in the work to earn a Division I opportunity.

“It’s awesome to have the opportunity to play college hockey in the state of Minnesota, four hours from home. It’s something I grew up thinking about,” he said. “I’m very fortunate for that. Overall, it’s very special and I’m glad I’m able to play my college hockey in Minnesota.” 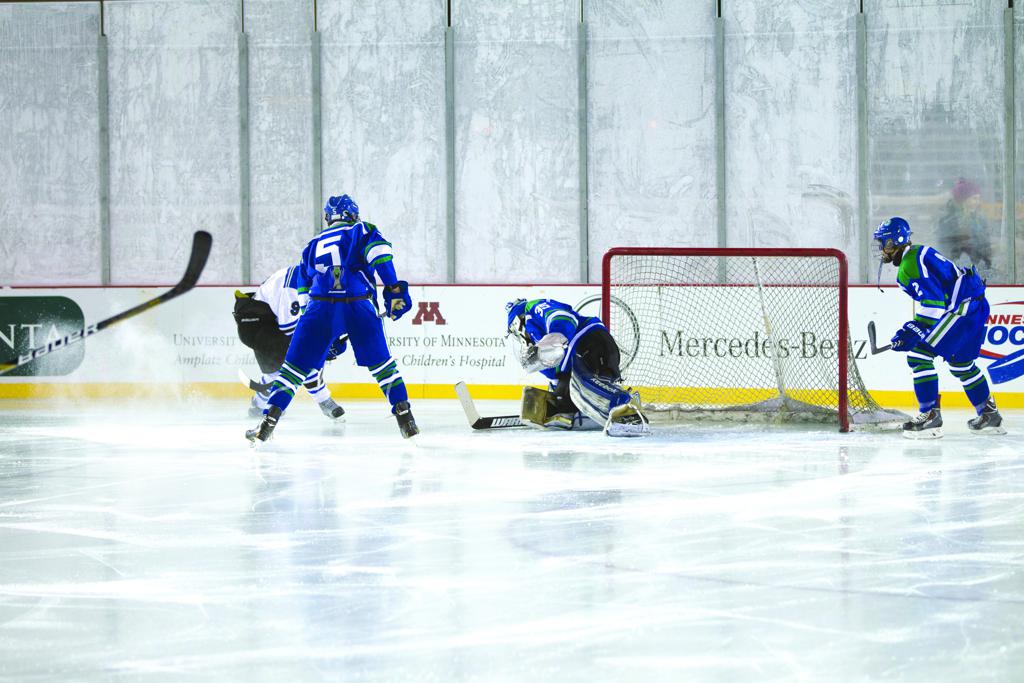 Before wearing Bemidji green, Muck was in Eagan blue and green playing a game he loves with his best buddies. Twice he helped the Wildcats reach the state tournament, being named a finalist for the 2014 Reed Larson Award, given to the top Minnesota high school senior defenseman.

Getting there with Eagan was a feat Muck passionately envisioned when he was younger.

“You go to those games, you go to the tournament as a kid and you think ‘this is sweet. I want to do this.’ Once you’re there, I remember my sophomore year in warmups trying to take it all in and shake the nerves off and thinking how it was crazy,” he said. “It’s totally different than when you’re up in the stands. Once you’re on the ice it’s a totally different animal.

During their first trip to Xcel Energy Center, Muck and Wolff were shut out by Moorhead and Muck’s future college teammate Michael Bitzer. During their second trip, Eagan defeated Wolff’s future hometown school Duluth East before falling to Edina in the 2014 Class AA semifinals and finishing third.

Even without a championship to bind them together, the trips to St. Paul created memories Wolff remembers and a camaraderie between his teammates lasting to this day.

“I laugh about it now thinking back. It was such a fun time in my life playing the sport I love with my best buddies,” Wolff said.  “You’re fighting hard-fought battles and you don’t want to do it with anyone other than your best buddies; especially those big games getting into the tournament, beating Eastview.

“Those are the memories you never forget and to do it with some of my best friends makes it better.”

During his time in high school and state tournament run, Wolff learned every game is not going to go their way. Being a leader means sticking together and finding success fighting through adversity when things are not going easy.

“You go to those games, you go to the tournament as a kid and you think ‘this is sweet. I want to do this.’ Once you’re there, I remember my sophomore year in warmups trying to take it all in and shake the nerves off and thinking how it was crazy.” – Tommy Muck

It’s an insight he’s taken with him to Duluth, a place that holds special meaning to Wolff. His parents are from there. His aunt works at Amsoil Arena. When Wolff suits up for the Bulldogs, several family members are always there to watch each night on a team striving to be the first to win three straight NCAA national championship since the 1950s.

Being the only returning Bulldog defender in 2017-18, Wolff was thrown into a situation where he was the veteran as a sophomore. He took a page from a pair of seniors, Brenden Kotyk and Dan Molenaar, the season before to help make things easier on the blue line.

“When I was a freshman, those guys took me under their wing and helped me on and off the ice,” Wolff said. “I was a little older of a freshman coming in, but just having a role model your freshman year really helps. It gets you comfortable with the team and college atmosphere and really helped me out.”

West of Duluth on US Highway 2 sees Muck as a leader of a Beavers blue line that aims to be the hardest working team.

One way Muck currently leads by example is by being a part of Bemidji State’s penalty kill, which has spent much of 2019-20 statistically the nation’s best. Going against other team’s top players forces him to outwork them so they cannot make plays. 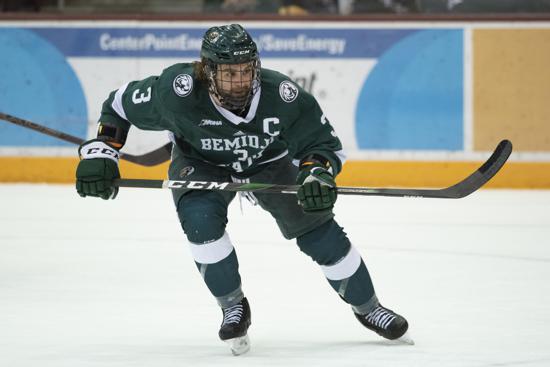 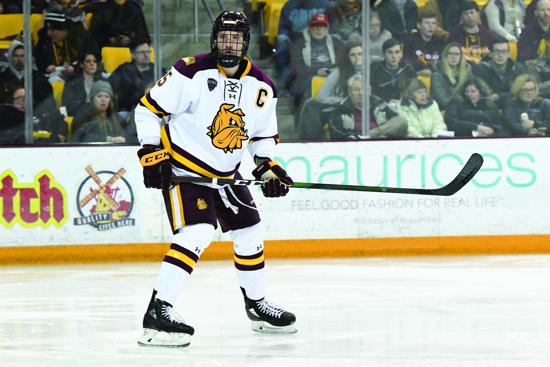 During their time in college, the Eagan High School teammates have gone on separate yet similar paths. Muck and Wolff faced each other their first two seasons - capped off by a 0-0 defensive stalemate in October 2017 - but play in different conferences.

That doesn’t stop both from seeing how the other is doing, catching up whenever both get the opportunity with the bonds of community and hockey tying them together.

“I know I follow up on him. He follows up on me,” said Wolff. “We wish each other good luck quite a bit throughout the year and keep in touch. It’s pretty special and cool that I was able to play with him (at Eagan) and we’re both able to play college hockey in the state of Minnesota.”

Once the kids in the stands watching the state tournament, Wolff and Muck are now being watched by them. Muck said he didn’t realize it until he left, but there are a lot of people who follow him back home.

The experience of being a state tournament team, taking those lessons from Eagan in 2014 and putting them together in Duluth and Bemidji in 2020, is one neither will forget. Both are happy to give back to the next generation watching, trying to figure out what it takes to be a leader from a pair who embody it no matter where they are in the state.

“Have fun, but you have to lead by example. The things that you do day in and day out is ultimately the direction that your team is going to go,” added Muck. “Hard work and having that mentality - it sounds a little cliche that you have to be the hardest worker, but ultimately hard work is ultimately one of the biggest attributes a player can have.

“If you’re a captain in high school, you got your best buddies looking up to you and if they see you working hard, they’re going to try working harder. They’re your buddies. They want to beat you. They want to come out on top. Overall, it’s speaking to them and lead by example and what to do day in and day out will lead you on the right path.”