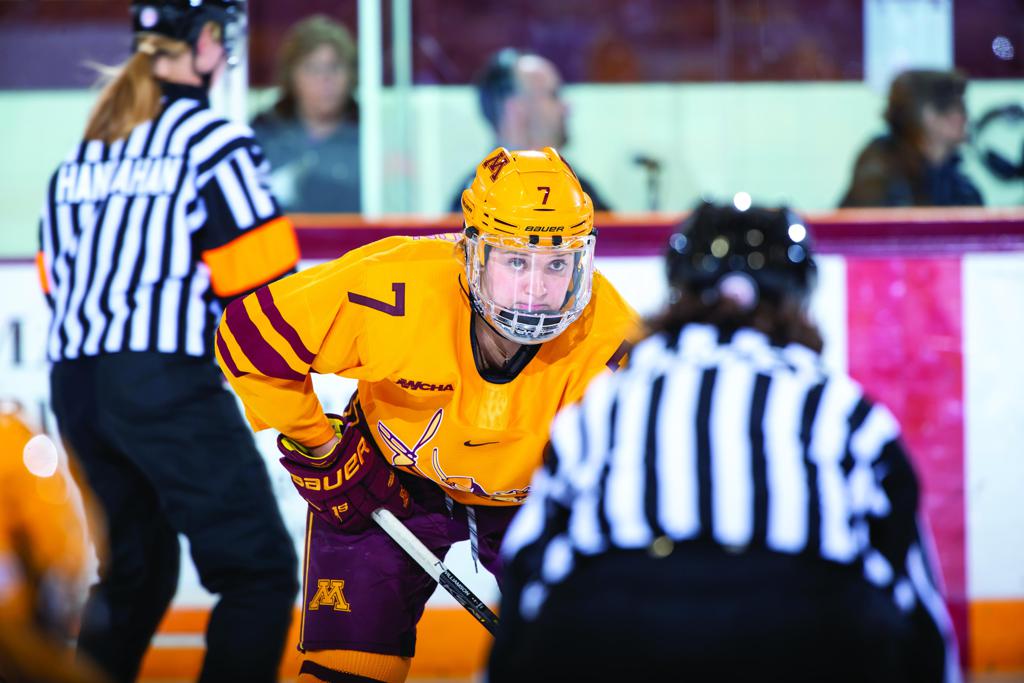 After starring at Edina and captaining the Golden Gophers, Taylor Williamson is developing the next generation of girls' hockey talent at Wayzata High School.

When Chaska/Chanhassen coach Jackie Pieper walked over to chat with opposing Wayzata coach ahead of a November 15 matchup, she was met with a friend, not foe in Taylor Williamson who played alongside Pieper at both Edina and the University of Minnesota.

“It was really fun. I was looking over and thinking, that’s my old coach. That’s my old teammate. Now here we are taking on completely different roles,” said Pieper, who like Williamson graduated college in May. “It was so much fun being able to coach against one of your really friends.

Both Pieper and Williamson, who is leading the Trojans with her father Dean, find themselves among a number of first-year head coaches at Minnesota girls high school programs giving back to communities. More, such as 2018 Olympic Gold Medalist Hannah Brandt at Hill-Murray and both Emma May and Rachael Bona at Wayzata, help out programs as assistant coaches.

These coaches help shape the lives and on-ice abilities of players not far removed from their own high school hockey playing days.

“I want to give back to the game. I look at my experience, high school hockey gave me so much and I want to return the favor; give back too,” said Northfield head coach Paige Haley. “A lot of my best friends from school are now entering positions in coaching and they feel very similarly.”

Whether it’s the alum starting a new chapter with her old team, the teacher finding her own path, or the new graduates getting bit by the coaching bug, this new generation of women’s coaches, all under 26 and experts at the game, now find it important to be in coaching and leadership roles for young women.

The days are long. Paige Haley begins hers at 4:30 AM. Emma Stauber goes to work at Duluth Hockey Company before going to coach hockey at Hermantown/Proctor. She just finished her masters degree in sports leadership and management. Pieper is in graduate school for speech pathology, mixing school and coaching together.

With Haley, a disciplined day starts with a workout. That’s followed by going to school, where the 24 year-old teaches fourth grade. By the time she’s done coaching, it’s already 7 p.m. 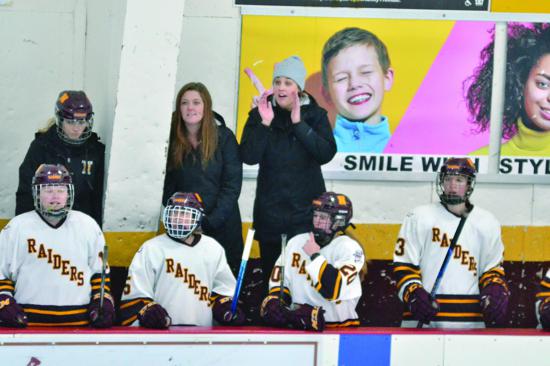 Growing up in Red Wing, Haley surrounded herself with southern Minnesota hockey. Her father, Scott, coached the Wingers for 13 years. He completely turned the program around into a state tournament contender.

It played a role in Paige, an assistant the past two years, wanting to begin her head coaching career at a fellow Big Nine school like Northfield as it jumps to Class AA and competes against schools like Lakeville North and South and Farmington.

“I was really inspired to see how he took a program in the southern part of the state where hockey is not as prevalent down here. We’re not part of the Metro. He took a place that no one really thought of and developed Division 1 athletes and a successful team,” said Haley. “I wanted to do that. I wanted to be a part of a program and actually have an impact on it.

“It would be very easy for me to go to a program that is already successful and continue it on, but I wanted more of a challenge than that.”

Williamson, meanwhile, came to coaching after going in a different direction from the business route she planned on taking after college. Illness - undergoing brain surgery and dealing with Myasthenia Gravis during her junior year - led the 2014 Minnesota Ms. Hockey winner into ministry and coaching.

During her mornings, she is on campus with the University of Minnesota meeting with students as part of Athletes in Action, leading a weekly bible study with her former Gophers teammates.

“I never really thought that (being a head coach) was something I’d do right out of college. After talking with my Dad and him jumping on board to do it with me, it was another one of those feelings that God was calling me to coach this team,” she said. “Now that I’m here I couldn’t be happier that I stepped up and took the job.”

As Williamson and Pieper help lead West Metro teams and Haley coaches in her familiar southern Minnesota, Emma Stauber walks through the doors of the rink where she used to play.

Previously an assistant coach at Duluth Marshall, Stauber replaced her own head coach, Glen Gilderman, after he spent 21 years with the Mirage. She helped lead Hermantown/Proctor to its first Class AA state tournament in 2010 as a player before going on to a collegiate career at Minnesota Duluth and professional hockey in both Sweden and America.

“It’s definitely an honor,” Stauber said. “Being a part of the program in that respect to our history, it’s even more special to be back here and super special for the girls that there’s another female willing to come back and be a part of the program again. Help them accomplish their goals.” 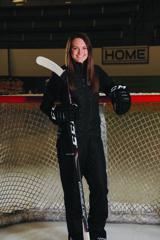 Emma Stauber has taken over her alma mater's program at Hermantown/Proctor.

She had thought about it over the years, but never thought the possibility of coaching at her alma mater would happen. When the timing worked out perfectly and the job opened, Stauber could not turn it down.

“To be back (at Hermantown/Proctor) is something I can really cherish,” said Stauber.

Getting the opportunity to share her experiences with her players remains important to Stauber, whether it’s system-wise or the life lessons hockey teaches them. She’s tried to expand the Mirage’s depth by running three lines instead of two.Just as important has been trying to be able to teach and help her players find joy in a certain aspect of the game and excitement in themselves.

Guiding the Next Generation

As recent players, being able to give guidance as coaches comes from a place of knowing what it’s like to play. (Stauber, who helped the Minnesota Whitecaps win the 2019 Isobel Cup, still balances coaching and playing.) The difference between the two gives them a new appreciation for the role. As players, they were able to control themselves. Now they need to motivate others and do not control anything on the ice.

Haley believes going from being a star player in high school to making limited minutes count at college at the University of Minnesota helped her coaching perspective, being on both sides of a team culture and helping her grow hers at Northfield.

“My job as their coach is to not only help them reach their highest potential as an athlete, but also as a person. That’s something I really want to drive into my kids,” Haley said. “Hockey is great and everything, but it’s not your entire life. What we’re trying to do is instill values in them that they use outside of the hockey rink.” 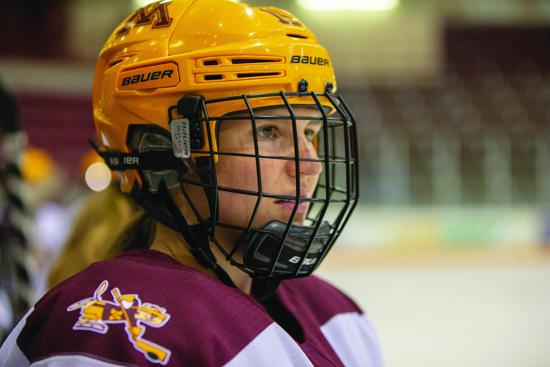 There’s also the side they didn’t know what to expect, dealing with the administrative part of the job. All four mentioned it being something that caught them off guard during their first season coaching.

Honoring Those Who Taught Them

The names who come up as coaching influences are expected. Parents who coached before them. Old high school coaches. (Or both, for Williamson, whose dad also coached Pieper.) College coaches - Shannon Miller for Stauber and Brad Frost, Joel Johnson, Bethany Brausen and Nadine Muzerall for the rest.

Incorporating a balance between having fun with hard work and success seems to pop up with the former Gophers. 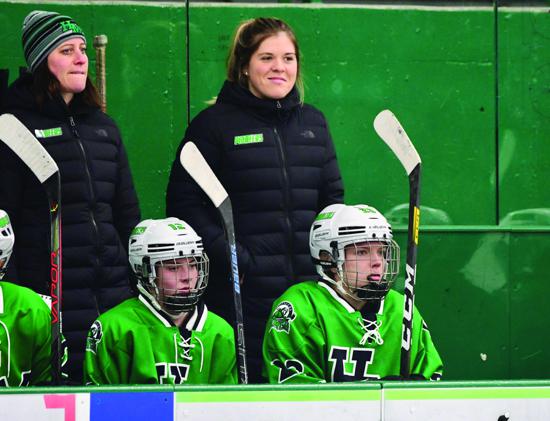 2018 Olympic Golf Medalist Hannah Brandt is an assistant at Hill-Murray. 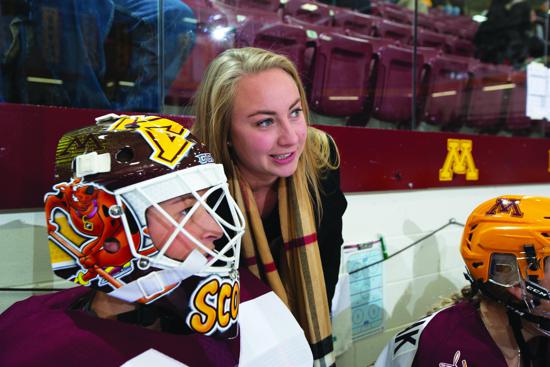 Roseville Raider Bethany Brausen is an assistant at the University of Minnesota.

“It’s great to see some really great female role models influencing the next generation of girls hockey players,” Frost said about having so many former players getting into coaching Minnesota HS hockey. “Hopefully that continues.”

At the same time, this new generation is influencing the next themselves. According to Pieper, the number of recent alums coaching Minnesota HS Girls Hockey shows how much women’s hockey is growing and how it is just continuing to grow.

“The importance that women are coaching girls is very vital. When we were playing, we had that first generation wave of the Natalie Darwitzes, Krissy Wendells who were showing girls and women that you can be an elite hockey player,” Haley said. “The first female coach that I had was Nadine Muzerall at the ‘U’ and seeing her at a coaching position showed me how important it is to have a woman in a coaching role because we’re not young men. We’re young women.

“Seeing that she had a successful career and she had influence shows us how much more important it is for a woman to be in that position than a man when you’re coaching girls.”

As they make their way through their first seasons, they hope to continue influencing by being in a visible role. It’s something Williamson learned from another one of her influences from the first generation, Winny Brodt Brown.

“My biggest thing I want people to realize is the opportunity and influence you, as a young coach, can have on a young person’s life. It’s people like Winny. You can change the trajectory of someone’s life by having one conversation with them about life. It doesn’t even need to be about hockey,” Williamson said. “It’s a test to what they’ve done and it makes us want to do the same thing for this next generation of kids growing up in the state of Minnesota.”