The trickledown effect of success in Duluth 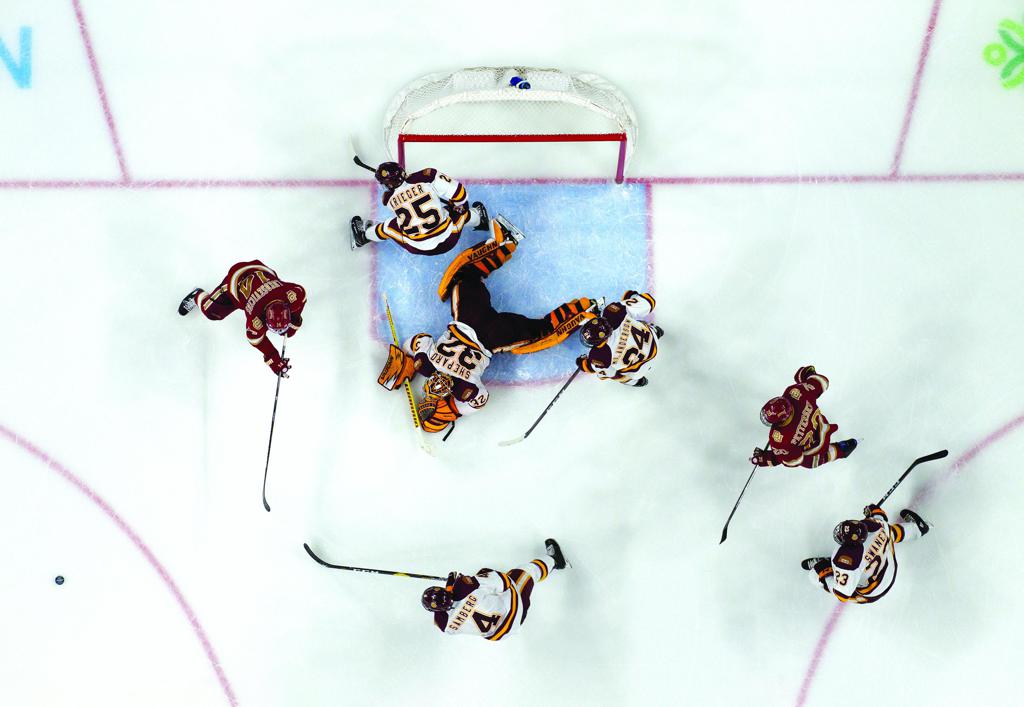 Patrick Andrews and the Miracle on Ice share a date of birth: February 22, 1980.

It’s a day, a moment, which lives on in hockey lore, and one whose success saw the boost of the sport throughout the country. Intertwined with America’s victory over the Soviet Union is the start of Andrews’ hockey story, coming from a family that never played hockey.

“My Dad told my Mom, ‘I think I have a hockey player,’ and it took off from there,” said Andrews, a Hermantown native and now the head coach of the boy’s high school program.

These days, the Duluth area is no stranger to success when it comes to hockey. Anyone growing up there in the last decade has been surrounded by some of the top teams. Hermantown played in the Class A boy’s Minnesota High School State Hockey Tournament championship game eight of the past ten seasons, winning twice. Class AA Duluth East has finished runner-up three times since 2011, most recently in 2018. Duluth Marshall was fourth in Class A in 2013.

Down the hill from Hermantown, the University of Minnesota Duluth men’s hockey team plays at a regularly sold-out Amsoil Arena. Winners of the 2011 national championship, UMD has been making banner-raising night an annual tradition. The Bulldogs are the two-time defending national champions, becoming the first team to defend its title in 14 years. Among the 17 Minnesotans on last season’s championship team are several whose path to success began in the same community they inspire the next generation. 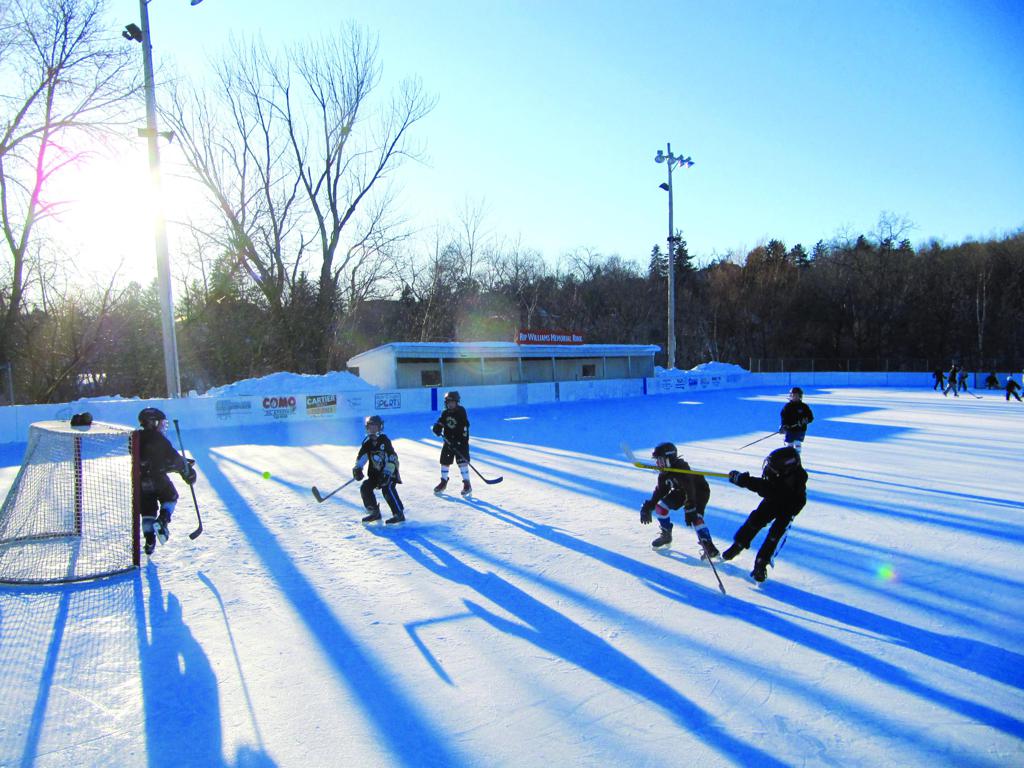 Far away from the championship banners and accolades are the outdoor rinks which remain the backbone of the sport in the Duluth area.

Inside the city, the Duluth Amateur Hockey Association is home to more than 750 kids and 100 coaches in what is believed to be the only outdoor hockey association in North America. Ten sub-associations are under the DAHA umbrella. Seven neighborhood rinks are maintained by hockey clubs throughout the town. Up until Squirts, games are held outside in the elements.

The unique setup, entrenched in the fabric of the Duluth community, helps keep costs down and spark creativity.

“We feel that when kids can get outdoor ice…our kids have unlimited ice to go out there to grow up and be rink rats and get creative and play pickup games,” DAHA Executive Director Jason Watt said. “We feel that with modern USA Hockey techniques and ‘rink ratting’ that we got the best of both worlds.”

At its core, young players are experiencing similar opportunities to those their parents grew up with, something Minnesota Duluth men’s hockey head coach Scott Sandelin appreciates.

“It’s great for most kids to get (outdoors) and practice, but there is a lot of free time for them. Just going out there and just not having a lot of structure, playing hockey,” he said. “Whether it’s making up games or little scrimmages or whatever they want to do without coaches, I think it’s really healthy for kids to continue to develop.”

When Andrews, who began skating at three or four, was a young child, Hermantown did not have an indoor rink. He spent his days outdoors and says they are some of his best memories. They knew the combination for the lights and were able to skate as long as they wanted. Even Samberg played his earliest days outdoors in nearby Twig for four years before moving on to Hermantown for squirts.

While Hermantown eventually embraced modernity by building an indoor sheet of ice, the link to the outdoors remains. There are five outdoor rinks at the arena for the community to use. Memories and opportunities are made on them each winter.

“I think that’s the thesis of our program,” said Blake Biondi, a senior at Hermantown committed to play hockey for Sandelin at Minnesota Duluth. “Our youth program, it’s the reason it has been so good. Outdoor hockey, obviously not everyone can be able to always skate indoors. When you have the opportunity to play outdoors, it’s the same thing and probably better. Because there’s creativity and no coaches. Just you out with your best friends, playing the game you love and I guess being grateful for it because you love it. You love the game.

“We have so many different opportunities and different rinks in the area to do that.” 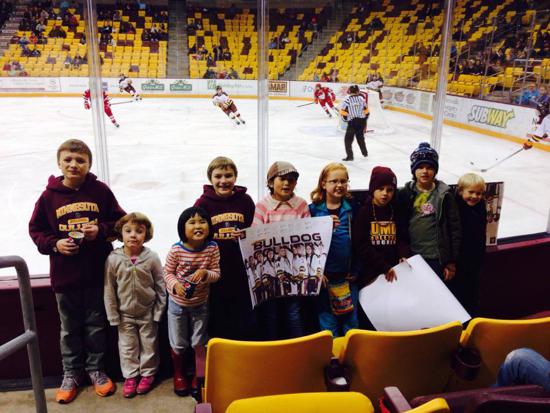 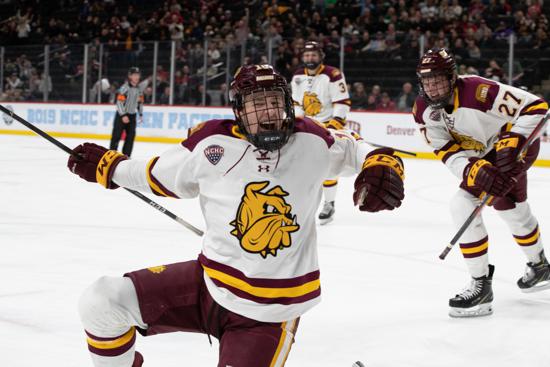 It Takes a Village

A happy side effect of giving young hockey players in the Duluth area opportunities is bringing the community together. It takes an effort to keep the outdoor rinks and system going.

“All of our Dads had schedules where they would go out on the outdoor rinks at certain times,” said Samberg. “They would be out there early in the morning or late at night, flooding the rink for us. That was nice.”

“The volunteers run it. I can’t say that enough,” Watt added. “Volunteers, hockey people giving back and then our parents running the arenas and putting time in - that’s really what it’s about. I know that’s warm and fluffy...but that’s the truth. That’s what it is. That’s what makes it go.”

For Andrews, it meant his father went from not playing and knowing very little about hockey to coaching.

These days, it’s a little different. The support still comes from the community. Andrews knows he can drop his son off at the rink on a Saturday and know someone else will be watching out for him, and vice versa. Hermantown’s success on the ice means the community is filled with plenty of coaches who did not learn the game out of a book.

“From ice Mites coaches on up, we have ex-Division 1 players and ex-pro players coaching our teams,” Andrews says. “All of our guys who have had success with Hermantown hockey as it was taking off, they are at that age where they are coming back and they are in the program. There’s a lot of UMD Bulldog that wanted to stay in the area and wanted to stay too, so we have that influx of tremendous hockey knowledge.

“There’s so much hockey knowledge in the program that, as a head hockey coach at the pinnacle, at the top of it, I don’t have to worry about what’s going on with our youth program because it’s great.”

One of those parents and coaches includes Sandelin, whose children went through the Hermantown program. The system reminded him of growing up in Hibbing with an outdoor rink a half a block away from his house.

“When I first moved to Hermantown, I was really impressed with seeing the five outdoor rinks they had. I didn’t know they had this,” he said. “The rinks were full. The kids were going there right after school and they get some open ice. So I think continuing to have that ability to get that ice time and have some fun is very critical.”

“The volunteers run it. I can’t say that enough. Volunteers, hockey people giving back and then our parents running the arenas and putting time in - that’s really what it’s about. I know that’s warm and fluffy...but that’s the truth. That’s what it is. That’s what makes it go.” -- DAHA Executive Director Jason Watt 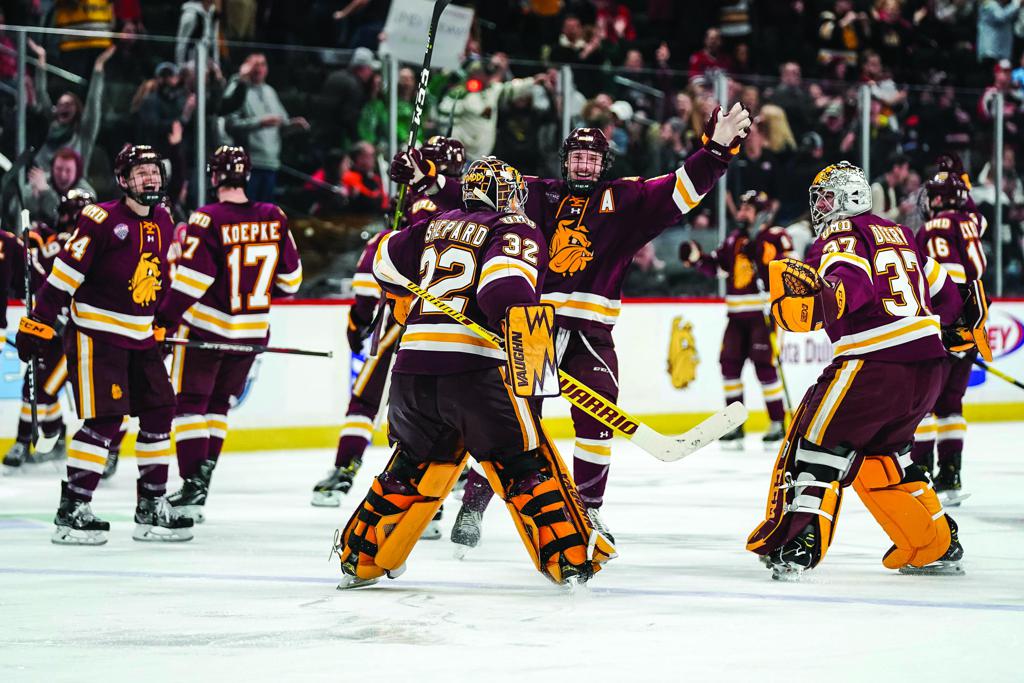 As both Minnesota Duluth and the Duluth area as a whole continue to find success, it’s apparent that the two are intertwined.

The 2011 NCAA championship was a massive moment for those growing up wanting to be Bulldogs.

“I hope the more success we have that it trickles down to those kids,” said Sandelin. “I don’t know if it helps them so much, but hopefully it does a little bit and maybe gets them excited about becoming a better hockey player themselves.”

Biondi, whose father Joe played for UMD in the 1980s, was one of them. He was at Xcel Energy Center, a moment that solidified him wanting to be a Bulldog.

So was Samberg. He was there in 2018 as well, helping win the program’s second championship alongside two other Hermantown natives and two more local players.

“We were a good community. After 2011, people saw a couple guys—Chad Huttel, who is a Hermantown native, and Kyle Schmidt, who scored the game-winning goal—that was pretty cool,” Samberg said. “A lot of the younger guys looked up to that and wanted to do that themselves. It drove them to be better hockey players.”

While Sandelin makes an effort to reach out to the community with his team, it’s not just at the college level where younger players look up to older players. DAHA programs see high school players encouraged to be at the rink to play with the younger kids. They are able to see go from the youth levels to high school to potentially Division 1 and beyond.

And whether it’s outdoors or indoors, Duluth and the entire area remains an example to others. It’s no miracle that the community continues to be near the top of hockey.

Make no mistake, it is a community effort. Volunteers and parents and the community as a whole play a role.

“Success breeds success. You have the high end hockey at different levels and the best at each level,” Biondi said. “I’ve thought of it the same way and so do a lot of people in the area.”

“Now the outdoor rinks are such a part of our culture at Hermantown. That is our hockey culture, that is our hockey success,” added Andrews. “The ADM Model that USA Hockey is pushing out where it’s all about small area games and puck touches comes because most places in the country and even Minnesota don’t have any outdoor ice anymore. Kids aren’t learning to be creative and learn to play like a rink rat.

“We’re fortunate enough that our kids are able to do that all the time. It’s such a part of our community.”

Whether it’s players like Biondi and Samberg, moving up from youth to high school and college and inspire the next generation, or the fun of a sold-out arena, or the excitement that comes with playing as part of the only outdoor hockey association in North America, there are lessons other communities can take away. Even for those places where outdoor ice may not be an option.

“You want to see that kids are having fun and want to play,” Sandelin said. “Hopefully, you can add new kids along the way, but it’s about making the sport fun. That’s a big part of it because sometimes when you don’t have the numbers it’s hard to get the quality of programs.”

That hasn’t been an issue in Duluth, a place where the sport continues to be a boost and part of the fabric that makes up the area.

“Duluth has just got that rich history going back, starting with those outdoor rinks. I think the biggest thing you can say about Duluth hockey is that we have one foot in the old school and one foot in the new school,” Watt said. “I think that serves us well.”