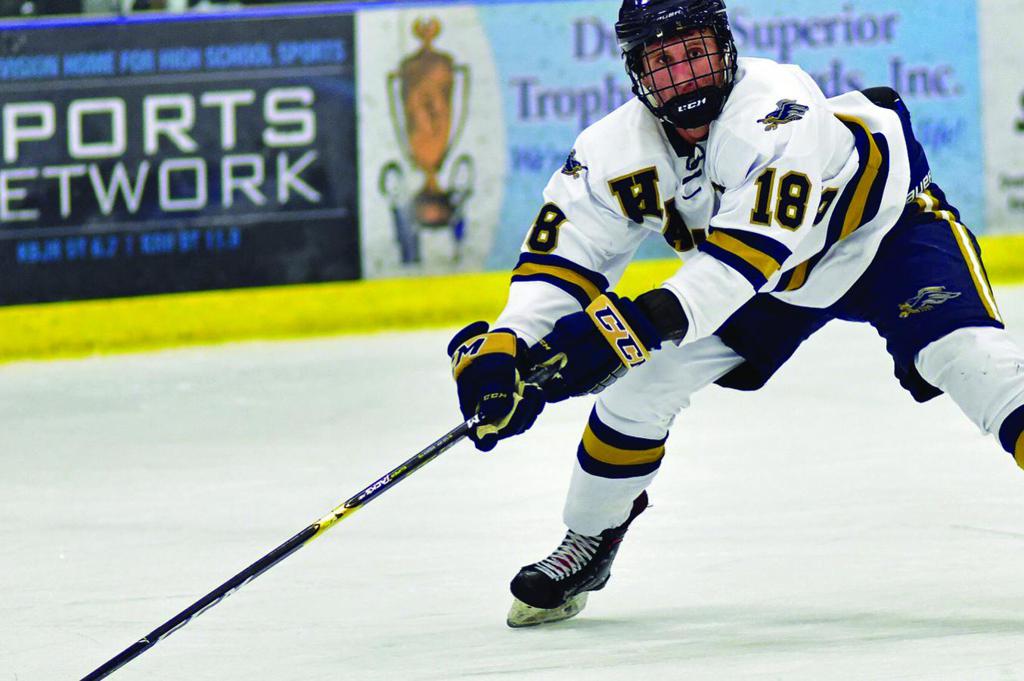 You could call him a forward—those in Hermantown, Minnesota, and at the 2019 Minnesota High Performance 17 Spring Festival and Final 54 do.

You could also call him a defenseman—something he’s called himself since the age of 3 growing up in Ely, Minnesota, and a position he was best known for at the 2019 USA Hockey Boys HP 17 National Camp (despite making the camp as a forward).

“When I was evaluating him, I wasn’t sure which position I should evaluate him as because he’s done both and he really truly excels at both,” USA Hockey youth director Kenny Rausch said of Pierce, who he saw play at national camp this past summer in Amherst, N.Y. “He’s such a hybrid player. You love to see it.”

“I think this year I’m going back to defense,” claimed Pierce who racked up 17 goals and 18 assists last season for the Hawks, his first official season as a forward, good for second in team points behind Blake Biondi. “

But, for those who know Pierce and his ability to be a versatile player, you know you can’t rule anything out.

“He’d play goalie if I’d let him, I know he would,” Hermantown coach Patrick Andrews said with a laugh. “And he’d probably be good at it.” 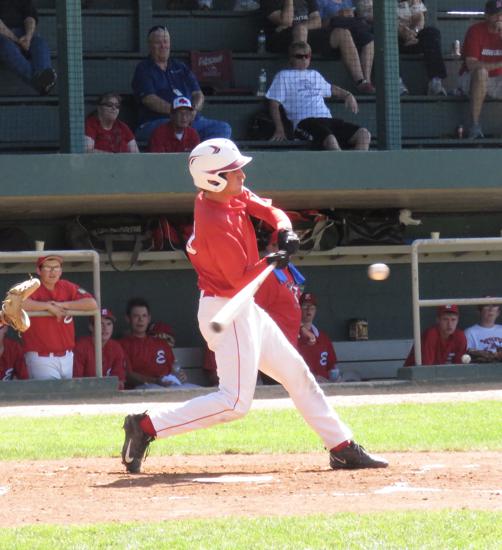 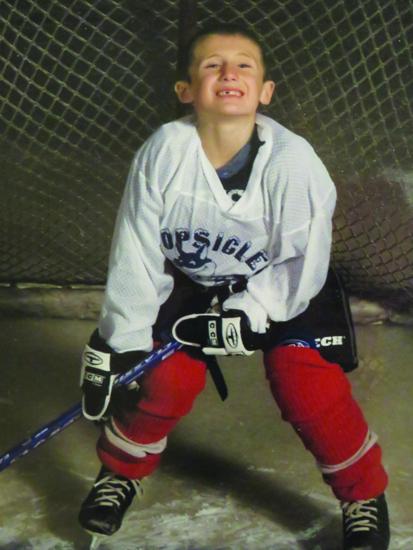 Pierce was always an offensive threat. In Ely he was a part of every rush and became the go-to guy, ready to jump into the play when given the chance.

He had no fear of being in the offensive zone—made apparent by his 34 points (14 goals, 20 assists) through 21 games in 2016-17—and he had no desire to be strictly a stay-at-home defenseman.

Instead, Pierce led from the backend. He captained the 2017-18 Hermantown Bantam AA squad to the Minnesota Hockey State Tournament. That’s where Andrews first caught a glimpse of Pierce the defender.

In the Fall of 2018, due to injuries, Andrews got to see Pierce the forward during the Upper Midwest High School Elite League.

“For one game I was going to play forward,” explained Pierce, who collected six goals and 14 points in 21 games with Team North. “I ended up playing really well, and the coach asked me if I wanted to keep playing.”

As one game snowballed in to a few more, Pierce drew the attention of his Hermantown High School coaches during an Elite League tournament in Duluth.

“We started by trying him out as a forward in scrimmages,” recalled Andrews. “We put him on the top line with (Biondi) the second week and he had something like four goals that weekend in two scrimmages. He had two more goals through another half a game. You can’t deny your offensive of that.

And while the dynamics of excelling in two positions creates a win-win situation, Andrews said the biggest win is Pierce’s willingness to go wherever he can help the team out the most.

“Joey is 100 percent a team-first guy,” said Andrews. “He just wants to win, and he wants to have great experiences. He’s made that point known to me hundreds of times. …He wants to play D, and that’s great and we’ll honor that, and I wanted him to be the one to make the decision. But he also told me that, at the end of the day, he wants to help the team win, and if we need him to play forward, he’ll do that.

“I never want to hold anything back selfishly just for myself,” added Pierce. “I think for me, I’ll do anything to help the team win. It there’s an opportunity that the coaches present me with to do that, I’ll usually take it. I trust them, so if they’re asking, its what they think is the best thing for the team, so I’m all in.” 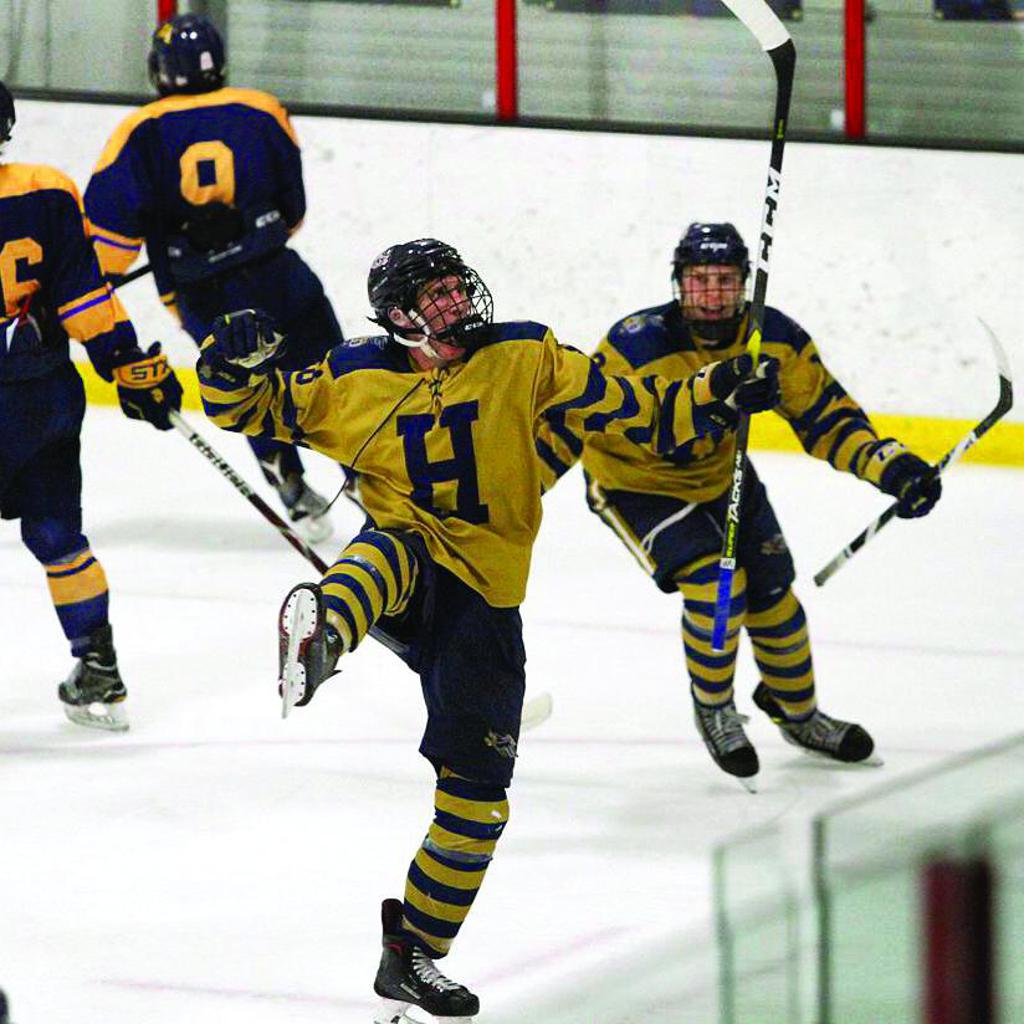 “I’m so impressed with (Pierce), first and foremost as a human being, and secondly as a hockey player. He does all those little things right that you ask of a kid. On top of it he happens to be an elite hockey player.” – Hermantown head coach Patrick Andrews

Offensive-defenseman; Defensive-thinking forward—no matter how you spin it, there are definitely plenty of advantages to being a player that can play both ends of the puck.

“I think, playing multiple positions teaches you more about the game,” said Pierce. “Playing forward this past year taught me a ton about being a defenseman, being on the other side of the puck and finding out what works and what doesn’t work there. Playing against other good defensemen and I was able to learn from them as a forward helped me a lot. You see the game from a whole other angle and teaches you lot.”

Pierce adds that for him, it’s all about winning battles on the ice. On the forecheck or in the corners behind their own goal line, it’s the 1-on-1 battles he prides himself on.

Rausch takes that battle aspect a step further in the aid being a positionless hockey player has in development.

“We all know that kids get caught in different spots on the ice, not necessarily different positions, and let’s say they’re leading a rush, what are mom and dad screaming at defenseman? ‘Get back!’” Rausch said. “But kids need to be able to be prepared to know what do to in all situations. Whether they line up at left wing or line up at D for the faceoff doesn’t matter, you need to be prepared to play in every situation on the ice.”

Forward and defenseman; great hockey player and person—Pierce embodies them all.

“I’m so impressed with (Pierce), first and foremost as a human being, and secondly as a hockey player,” Andrews said. “He does all those little things right that you ask of a kid. On top of it he happens to be an elite hockey player.”