The University of Minnesota-Duluth hockey program is on a roll, with an eye on another WCHA title this season.

The University of Minnesota-Duluth hockey program is on a roll, with an eye on another WCHA title this season. In the process of moving from their home since 1966 into the $80 million AMSOIL Arena, the Bulldogs have gone from playing in the conference’s oldest building to playing in its newest.

That distinction is nice, but head coach Scott Sandelin has the Bulldogs pointed in the direction of a more important title, that of champion. The Hibbing native and former North Dakota standout wants to see the Bulldogs in the hunt for championships year-in and year-out.

Heading into the new year, Sandelin had UMD ranked among the nation’s top five teams and on track not only to challenge for the MacNaughton Cup (WCHA regular-season championship) and the Broadmoor Trophy (WCHA playoff championship), but also for even greater postseason success.

If it were up to Sandelin, making noise on a national stage would register less as news and more an annual confirmation of the momentum he’s building on the shores of Lake Superior. Duluth’s head coach since 2000, Sandelin has the kind of team in 2010-11 that can serve the dual function of winning games now and cementing a promise for the future.

We’ve had a couple 20-win seasons, and a little more success, but it’s still not good enough...

“We’ve had a couple 20-win seasons, and a little more success, but it’s still not good enough,” said Sandelin, who guided the 2003-04 Bulldogs to the NCAA Frozen Four. “Our players, they want more than that. They want to experience that opportunity to win championships and have the opportunity to play in those big games. That, to me, is what its all about.”

The new building should help.

AMSOIL Arena is a 6,700-seat arena near Duluth’s charming waterfront, only a few hundred feet from the venerable Duluth Entertainment and Convention Center, but also so far away in many respects. It’s brighter and the ice is better. The scoreboard is contemporary and the locker rooms are big. A maroon and gold seat pattern percolates from the ground up. The amenities are upgraded everywhere one turns.

About the only thing missing is the history of the “old” DECC. And that’s where this edition of the Bulldogs comes into play. The UMD program is rich in history — with such names as Greg Andrusak, Brett Hull, Curt Giles, Tom Kurvers, Dave Langevin, Junior Lessard, Norm Maciver, Bob Mason, Matt Niskanen, Mark Pavelich, Derek Plante, Shjon Podein, Mason Raymond, Glenn Resch, Bill Watson, Larry Wright and Dennis Vaske among more than 40 NHLers — and its players become part of the fabric of not only the program, but also the city. 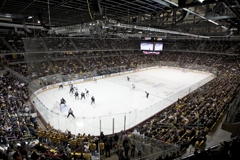 UMD has been good for occasional forays into conference and NCAA tournament season, as evidenced by the 2003-04 effort, but the idea going forward is to sustain momentum.

“I would say they’ve turned a corner again,” said Jim Rich, a Twin Cities sports anchor who grew up in Duluth and covered the Bulldogs for several seasons. “I think the players Scott is bringing in are creative players, a lot like the players they had back in their heyday — the Macivers, the Kurvers, the Watsons, guys with this unique vision to see the ice, to see things develop.”

In 2010-11 there’s Jack Connolly, Justin Fontaine, Mike Connolly (no relation to Jack) and Mike Montgomery. Montgomery, a big defenseman from Lino Lakes, is the captain, an even-keel presence for Sandelin. Justin Falk, only a freshman, is another standout defenseman who is coming off a stint with the 2011 U.S. National Junior Team.

The Connollys, who serve as alternate captains, along with Fontaine, bring the scoring punch. All three might be considered undersized (Fontaine is the biggest of the three top scorers at 5-foot-10), but they offer a great deal of skill. After 21 games, all three were better than point-a-game players.

Our goal is to recruit more skill guys, which I think we’ve tried to do. But I think we have a good mix.

Duluth native and junior Jack Connolly was named the 2010-11 Preseason Player of the Year by the league’s coaches and is the first returning All-American the Bulldogs have had in 25 years. Mike Connolly, also a junior, entered the season as the first UMD player since Hull to record back-to-back 40-point seasons. Fontaine entered the season as the WCHA’s second-highest scorer over the previous two seasons.

It is further evidence that while Sandelin recruits for the team’s needs, there is a premium placed on skill.

“We’ve got some guys I think are potential difference-makers in the game and through the season,” said Sandelin, who counts among his assistants UMD alums Plante and Brett Larson. “Our goal is to recruit more skill guys, which I think we’ve tried to do. But I think we have a good mix.”

After the season’s first half, Sandelin was pleased with the Bulldogs’ record — especially their non-conference slate, which last season may have conspired to scuttle an NCAA bid and continues to serve as motivation during this season.

“Last year left a bitter taste in our players’ mouths,” said Sandelin. “I think those guys came back with higher expectations and a little more motivation. You have to have high expectations. We’re still building that.”

Sandelin’s approach is to find those skilled players who believe in the program, and who may stay for four years.

“Since I got here, I’ve said I want players who want to be a Bulldog and want to play in this program. I think it’s a great program. Duluth’s a great hockey community. The rink is right on the harbor — that’s a pretty neat spot. It’s a great education. We’ve got a lot of alumni that end up making their home here, which tells me it’s a pretty special place.”

Many believe it is a combination that can lead to bigger and better things at Duluth.

So the history remains to be written at AMSOIL arena, which will be broken in by great games, wins, memories and, hopefully, a few WCHA titles.

“We’re very thankful it got done and we’re certainly pleased with the result,” said Sandelin. Now we just have to win hockey games and make it a tough place for teams to play.”

If everything goes according to plan for Sandelin, opponents may be entering the home of a champion.